A file picture of the FueLNG Bellina, Singapore's first LNG bunkering vessel, which was involved in the operation. - COURTESY OF CMA CGM GROUP AND FUELNG

The use of LNG as a marine fuel has been gaining traction in Asia amid a global push to reduce carbon emissions.

Singapore expects annual LNG bunkering capacity to hit one million tonnes by 2021. The city-state has been extending its LNG infrastructure by expanding storage capacity and issuing LNG bunkering supply licences.

The Maritime and Port Authority of Singapore (MPA) and FueLNG, which is a joint venture between Keppel Offshore & Marine and Shell Eastern Petroleum, completed the operation on Friday, according to the statement.

The gas-up and cool-down operation was done on the LNG-powered oil tanker 'Pacific Emerald', and included the transfer of 3,000 cubic metres of LNG to the tanker from FueLNG Bellina, Singapore's first LNG bunkering vessel, the companies added.

'Pacific Emerald' is the first of 10 new-build Aframax tankers chartered by Shell Tankers Singapore from Sinokor Petrochemical Co, they said.

Shell is actively investing in building a global LNG bunkering network to support the sector with capabilities to tackle emissions with urgency, said Tahir Faruqui, director of FueLNG and head of Shell Downstream LNG.

Shell is investing in LNG for its own long-term charter fleet to deliver its products, he added. 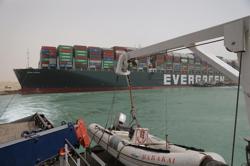