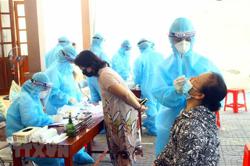 Morning commuters wearing face masks, amidst concerns about the Covid-19 coronavirus, wait at a traffic light in Hanoi. Vietnam has extended the quarantine period for anyone arriving in the country to three weeks, authorities have announced following a fresh community outbreak of the Covid-19. - AFP

HANOI, May 6 (AFP): Vietnam has extended the quarantine period for anyone arriving in the country to three weeks, authorities have announced following a fresh community outbreak of the coronavirus.

The nation has so far kept case numbers low -- recording just over 3,000 cases and 35 deaths -- thanks to strict quarantine measures and extensive contact tracing.

But Vietnam reported its first community outbreak in weeks last Thursday, and other clusters have since emerged.

Several cases have been linked to people who tested positive after their two-week stay in hotel quarantine had ended.

"The Ministry of Health has decided to extend the period of mandatory quarantine for people who have made close contact with Covid-19 patients and people who have entered Vietnam," said health minister Nguyen Thanh Long.

The new quarantine period will be 21 days.

The announcement came after one of the country's best hospitals -- which has treated many Covid-19 patients -- went into lockdown Wednesday, after a doctor tested positive for the virus.

Fourteen others at the National Hospital for Tropical Diseases in Hanoi were later found to be infected.

About 800 medical workers, patients as well as any relatives who were visiting at the time the lockdown was announced must remain in the hospital for two weeks, authorities said.

Vietnam has also detected cases in the community of a Covid-19 variant believed to be behind a devastating surge in infections in India.

But the country has been on high alert amid a spiralling outbreak in other parts of Southeast Asia including Cambodia and Laos, which both share a border with Vietnam.

Meanwhile, Vietnam recorded 26 new cases of Covid-19 infection on Wednesday night (May 5), including 18 locally transmitted and eight imported, raising the total confirmed cases in the country to 3,022, according to the country's Ministry of Health.

Among the community cases, 14 were reported in a hospital designated for COVID-19 treatment in the Vietnamese capital Hanoi, with the transmission source currently unknown.

The other community cases, including one each reported in Hanoi, the northern Hai Duong province, the central Quang Nam province and the southern Dong Nai province, are all contacts of previously confirmed patients.

The imported cases are all Vietnamese citizens who recently entered the country from abroad and were quarantined upon arrival, said the ministry.

As many as 2,560 patients have been given the all-clear as of Wednesday, the ministry said, adding that over 40,700 people are being quarantined and monitored. - AFP
Article type: metered
User Type: anonymous web
User Status:
Campaign ID: 46
Cxense type: free
User access status: 3