Medical staff wait at a traffic light to walk across to Tan Tock Seng Hospital in Singapore on April 30, 2021, as authorities sought to contain the spread of the Covid-19 coronavirus after a cluster of cases were detected at the facility. - AFP

Singapore, May 5, 2021 (AFP): Singapore announced a slew of new coronavirus restrictions on Tuesday (May 4) including a ban on spectators at sporting events as infections rise in the wealthy city-state.

After a partial lockdown and rigorous regime of testing and contact tracing, Covid-19 had almost disappeared in Singapore, with authorities in recent months reporting hardly any local transmission.

But cases rose last week with officials announcing several new clusters, and in the last seven days 60 locally transmitted infections have been reported.

A cluster at one of Singapore's biggest hospitals has grown to 40 cases, including an 88-year-old patient who died on Saturday.

Gatherings will be limited to groups of five and more people will be required to work from home, officials said at a press conference on Tuesday.

Indoor gyms and fitness studios will be closed and numbers further reduced for conferences, weddings and funerals.

Travellers arriving from most countries will be required to quarantine for three weeks instead of two.

"The next few weeks will be critical for us," said health minister Gan Kim Yong.

He warned of further measures if the situation deteriorates, including the possibility of another partial lockdown.

"With this set of measures... I think we probably will be able to avoid having to get to a circuit breaker situation, but we cannot rule that out."

Singapore's infection numbers have been very low compared with the rest of the world, but the new clusters have raised fears of a resurgence in the tiny city-state, whose economy suffered its worst ever recession last year due to the virus.

There are also concerns the clusters could scupper a quarantine-free travel bubble between Singapore and Hong Kong, due to begin on May 26 after an earlier failed attempt. 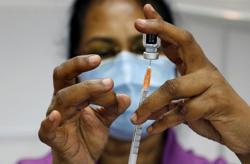