MANILA, May 5 (Bloomberg): The Philippines said China’s unilateral fishing ban in the South China Sea doesn’t apply to areas within the Southeast Asian nation, in yet another sign of tension between the two countries.

The National Task Force for the West Philippine Sea "opposes China’s imposition of the same over the areas within the territory and jurisdiction of the Philippines,” it said in a May 4 statement. "Our fisherfolk are encouraged to go out and fish in our waters.” Vietnam had been opposing China’s fishing ban in waters that include areas where it has claims.

The Southeast Asian nation will continue law enforcement patrols and maritime exercises on a rotational basis over the waters within its exclusive economic zone, the task force said, condemning the Chinese Coast Guard for its "dangerous maneuvers” against its Philippine counterpart in late April in Scarborough Shoal.

The task force said that it also spotted seven Chinese militia vessels on April 27 in Sabina Shoal that’s 130 nautical miles off Palawan province. The vessels dispersed after being challenged by the Philippine coast guard, the task force said. 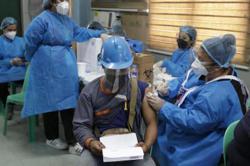 Myanmar village burned after fighting; residents blame security forces
Asean Plus Eight welcome extension of ministerial-level security hotline
Biden, Putin paper over splits as both claim summit victories
Chinese rocket carrying first crew to new space station blasts off
Japan seeks to end Tokyo virus emergency a month before Olympics
Reaction to Biden-Putin summit ranges from 'positive' to 'disturbing'
Putin lashes out at US after meeting with Biden
Authorities warn of aftershocks after 6.1 quake
Get a jab and win a prize
PM sorry for delays in vaccinations