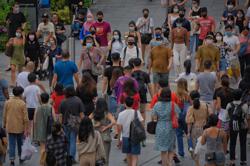 Patrons checking into Cathay cinema at JEM on Oct 31,2020. Cinema operators have said they will be limiting seating to 100 people. - The Straits Times/ANN

SINGAPORE, May 5 (The Straits Times/ANN): Cinemas in Singapore will further limit seat capacities to comply with the new Covid-19 measures announced this week.

A check by The Straits Times with cinema operators found that they will limit seating to a maximum of 100 per hall. This allows for screenings to be run without the need for pre-event testing, which kicks in at screenings with more than 100 attendees, up to a maximum of 250 attendees.

A spokesman for Golden Village Multiplex said under existing social distancing rules, in force since last year, halls are already running at 50 per cent capacity.

"With the latest announcement, our overall seating capacity will drop even further," she said on Wednesday (May 5).

The new regulatory period runs from May 8 to 30, during which the much-anticipated blockbuster action thriller Fast And Furious 9 will be released, on May 26.

The movie, the latest instalment in the car-chase franchise, is expected to be a box-office smash over a period which has been mostly quiet following the record-setting release of monster movie Godzilla Vs Kong in March.

Flora Goh, managing director of film distributor United International Pictures (UIP), said that there are "no plans to push back the Fast And Furious 9 release in Singapore cinemas".

"Fans can still catch its super sneaks from May 21, more than a month ahead of the US release on June 25," she said.

The 30th European Film Festival, which runs from May 6 to 23 at the indie cinema The Projector, will go ahead but with changes to comply with the new rules.

For films that are over the limit, the EUFF said it was working with The Projector and participating embassies to release tickets that had been set aside for embassies in order to accommodate paying ticket-holders. Refunds will be made for screenings if this is not possible, with those who booked tickets earlier getting priority for the screenings.

Because the new rules limit groups to five, those with bookings for larger groups will be contacted for new seating arrangements. Live speeches will be replaced with pre-filmed segments, starting from opening night on May 6.

For the 9th Singapore Chinese Film Festival, which started April 30 and ends May 9, some films screening on May 8 and May 9 will be affected.

These include The Story Of Southern Islet, Like The Dyer's Hand, Hand Rolled Cigarette and Anima, to be screened at Golden Village and FilmGarde Bugis+ cinemas.

For screenings that exceed 100 persons, patrons will be spread across more halls to stay under the limit, said a spokesman. All in-person question-and-answer sessions from May 8 will be cancelled.

Meanwhile, one new Covid-19 case in the community was reported at noon on Wednesday (May 5).

There were also 15 imported cases who were placed on stay-home notice (SHN) on arrival in Singapore, said the Ministry of Health (MOH).

The sole community case is not linked to the Tan Tock Seng Hospital cluster, MOH added. The cluster currently has 40 linked cases as of Tuesday night (May 4).

In all, 16 coronavirus cases were reported on Wednesday, taking Singapore's total to 61,268.

There were no new cases from the workers' dorms. - The Straits Times/ANN 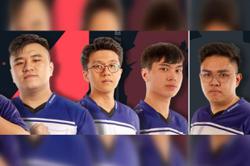