BANGKOK, May 5 (Bloomberg): The Bank of Thailand is expected to keep its benchmark interest rate unchanged on Wednesday as investors seek clarity on how the nation’s biggest wave of Covid-19 infections yet is impacting the economy.

All 22 economists surveyed by Bloomberg expect the central bank to keep the policy rate at at a record-low 0.5% for an eighth straight meeting. The Monetary Policy Committee also will assess how the pandemic is affecting the economy.

The recovery was gaining steam in March before the latest outbreak hit, with Thailand’s total virus cases and deaths since the pandemic began more than doubling in April. With containment measures now in place across the country, the Finance Ministry last week cut its forecast for 2021 gross domestic product to 2.3% growth, from 2.8% expected earlier.

"The Bank of Thailand is likely to extend its cautious tone on the economy’s outlook, including a likely delay in border reopening as cases spike locally as well as in multiple pockets globally, while the vaccination rollout hits speed-bumps,” said Radhika Rao, an economist at DBS Bank Ltd. in Singapore.

"Policy guidance is unlikely to deviate from recent rate reviews, highlighting the available room to act, but preference to hold back ammunition for the time being.”

Here’s what to look for in Wednesday’s decision:

The central bank last week reiterated its April forecast for 3% GDP growth this year, but noted downside risks as the spike in infections hits consumption and delays plans to reopen borders to foreign tourists. Investors will want to see whether the central bank will update its projections ahead of the scheduled review in June.

A key question will be the fate of the tourism sector, which contributed about one-fifth of Thailand’s gross domestic product before the pandemic. In March the central bank cut its forecast for expected tourist arrivals this year by 45% to 3 million, while the Finance Ministry said last week it now expects just 2 million tourists, down from an earlier estimate of 5 million.

The government tightened restrictions from Saturday, extending the quarantine period for all arrivals to two weeks, banning large gatherings and mandating mask-wearing nationwide. Dining at restaurants is prohibited and travel restrictions have been imposed to and from high-risk areas -- including Bangkok -- for at least 14 days.

The government insists a plan to reopen the key tourist area of Phuket to vaccinated visitors remains on track for July. It’s currently negotiating to secure more vaccines, with a target of administering 100 million doses by the end of the year.

Fiscal policy and exports are expected to be the main drivers of Thailand’s economy this year, while other factors have deteriorated amid the pandemic.

The government so far has borrowed 67% of a 1 trillion-baht ($32.1 billion) plan approved in April 2020 to deal with the pandemic. Prime Minister Prayuth Chan-Ocha has prepared additional spending plans worth 380 billion baht to boost the economy, drawn from the existing budget plus leftover borrowing.

With the economy still needing support, Thailand is likely to review the 60% ceiling on its public debt-to-gross domestic product ratio, according to the head of the country’s debt management office. The ratio was at 53.2% as of February and is projected to rise to 58% when the government completes the 1 trillion baht borrowing plan by end-September.

"This is not the time to hold back,” said Burin Adulwattana, chief economist at Bangkok Bank Pcl. "The government must do whatever it takes to support the economy now. Our house is on fire and we must throw lots of water to put it down right now. It will be no use to hold back the water and only step in when the fire is out of control.”

For a change, the baht seems to be the least of the central bank’s concerns at the moment. The local currency has fallen 3.8% against the dollar this year, making it the second-biggest decliner among Asia’s major currencies. That’s a boon for exports, which rose 8.5% in March, with their value hitting a record amid improving global demand.

According to minutes of its March 24 meeting, the bank expects pressure on the baht to abate with the substantial reduction in the current-account surplus seen this year, but the monetary policy committee will continue restructuring Thai foreign-exchange markets to address underlying causes of pressure on the currency. - Bloomberg
Article type: metered
User Type: anonymous web
User Status:
Campaign ID: 46
Cxense type: free
User access status: 3 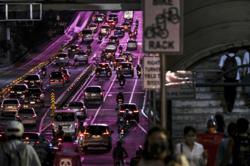