Broker flees after eight held in bid to cross border 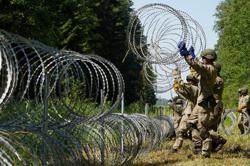 Remote trail: Soldiers detaining illegal immigrants at an undisclosed location near the border between Thailand and Myanmar, Laos and Cambodia in this file picture. — AFP

BANTEAY Meanchey provincial police are searching for a broker who was attempting to illegally take Cambodian migrant workers across the border in search of work in Thailand after eight people were detained on May 1 on the Cambodia-Thai border.

“The police are working to locate the broker. We have sent the workers to quarantine centres in Malai district, ” he said.

The police identified the eight people as Voeur Chhorvoan, 27, a resident of Phniet commune in Sisophon district; Heang Sokheng, 29; Rean Tavan, eight and So Nita, a one-year-old child.

Another three were ChhanSaolin, 31; Vo Nalen, four and Vo Sinthan, a nine-month-old child.

They are residents of Srah Raing commune in Banteay Meanchey’s Mongkol Borei district.

Sam Ath said before the arrest they were in Malai district and the broker would contact them by phone.

“The broker got a driver to transport them in a minivan.”

On arrival in the district, the workers got out and were told people were waiting to receive them.

Police detained them while they were walking. — The Phnom Penh Post/ANN 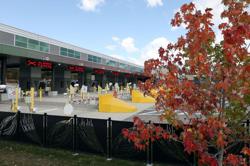