VIENTIANE, May (Vientiane Times/ANN): A number of policies are being considered to mitigate the effects of the ongoing Covid-19 outbreak on the economy and people’s livelihoods.

The Ministry of Energy and Mines recently issued a notice in response to a proposal made by Electricite Du Laos (EDL) to cut electricity rates for household use by 3 percent.

The ministry said it did not object to the proposal so long as the proposed cuts were approved by the state enterprise’s executive council.

A source at EDL said the executive council has not yet commented on the proposal.

The proposal recommends a price reduction for three months beginning with electricity bills for April. The price cut would apply to the residents of all provinces under lockdown, meaning that consumers throughout the country will benefit from the proposed policy if it is approved, as the lockdown is now nationwide.

Meanwhile, the Ministry of Public Works and Transport has asked state water supply enterprises in the capital and provinces to consider policy changes. These include reducing the charges for water consumption, postponing the payment of bills, and waiving valued added tax for household and non-household consumers during the virus outbreak.

On April 28, a national taskforce in charge of dealing with the economic impacts of the pandemic held talks to discuss policies to lessen the severity of the burden on families and businesses.

Participants discussed cuts in taxes and customs duty as well as postponing the payment of taxes, customs duty and other fees, as a way to cut expenses.

As the Covid-19 outbreak continues to affect workers across various sectors, the meeting reviewed the capacity of the social security fund and discussed ways to provide supporting allowances to workers who are members of the fund.

The meeting resolved to compile data about the number of workers in the informal sector and to draw up a social welfare plan to help them. In addition, participants studied ways to recruit unemployed workers.

Most of the policies considered are based on those introduced to mitigate the economic impacts when the pandemic took effect last year.

Those policies included waiving the salary tax for state and private employees, cancelling income tax for micro enterprises, and revoking tariffs, taxes and fees on goods imported for use in the response to the pandemic.

Other policies introduced to ease financial hardship included postponing the payment of taxes by tour and hospitality business operators and the postponing of the compulsory payment of social welfare by businesses.

The number of confirmed Covid-19 cases in Laos has reached 821 as 64 new cases were reported on Saturday.

Director General of the Department of Communicable Disease Control under the Lao Ministry of Health Rattanaxay Phetsouvanh told a press conference here on Saturday that among the new cases, 49 were detected in capital Vientiane, 13 in Champasak, and one each in Saravan and Oudomxay province.

As of Saturday, the total number of confirmed cases of Covid-19 in Laos stands at 821, with 51 recoveries. 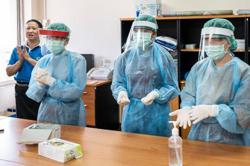