Cathay Pacific is offering its Hong Kong-based pilots, cabin crew and airport staff voluntary redundancy, part of a deepening effort to cut costs as the airline warned its business was not improving.

Hong Kong’s struggling flag carrier told staff on Tuesday it foresaw “no discernible improvement” in the short to medium term, prompting the company to ask employees if they wanted to leave their jobs. The airline said it would continue to operate a skeleton passenger flight schedule for “some considerable time”.

The voluntary redundancies are tied to the near-total collapse of the passenger flight market amid the global coronavirus pandemic, with the ripple effects being felt across the group’s operations that rely on travellers.

Cathay Pacific’s catering business was also seeking volunteers for redundancy, but budget carrier HK Express was not planning to shed jobs, a source familiar with the situation said.

The carrier cut 5,900 jobs last year and lost HK$21.6 billion (US$2.8 billion). Last week, it revealed it was planning the closure of the first of several overseas pilot crew bases, placing hundreds of jobs at risk. 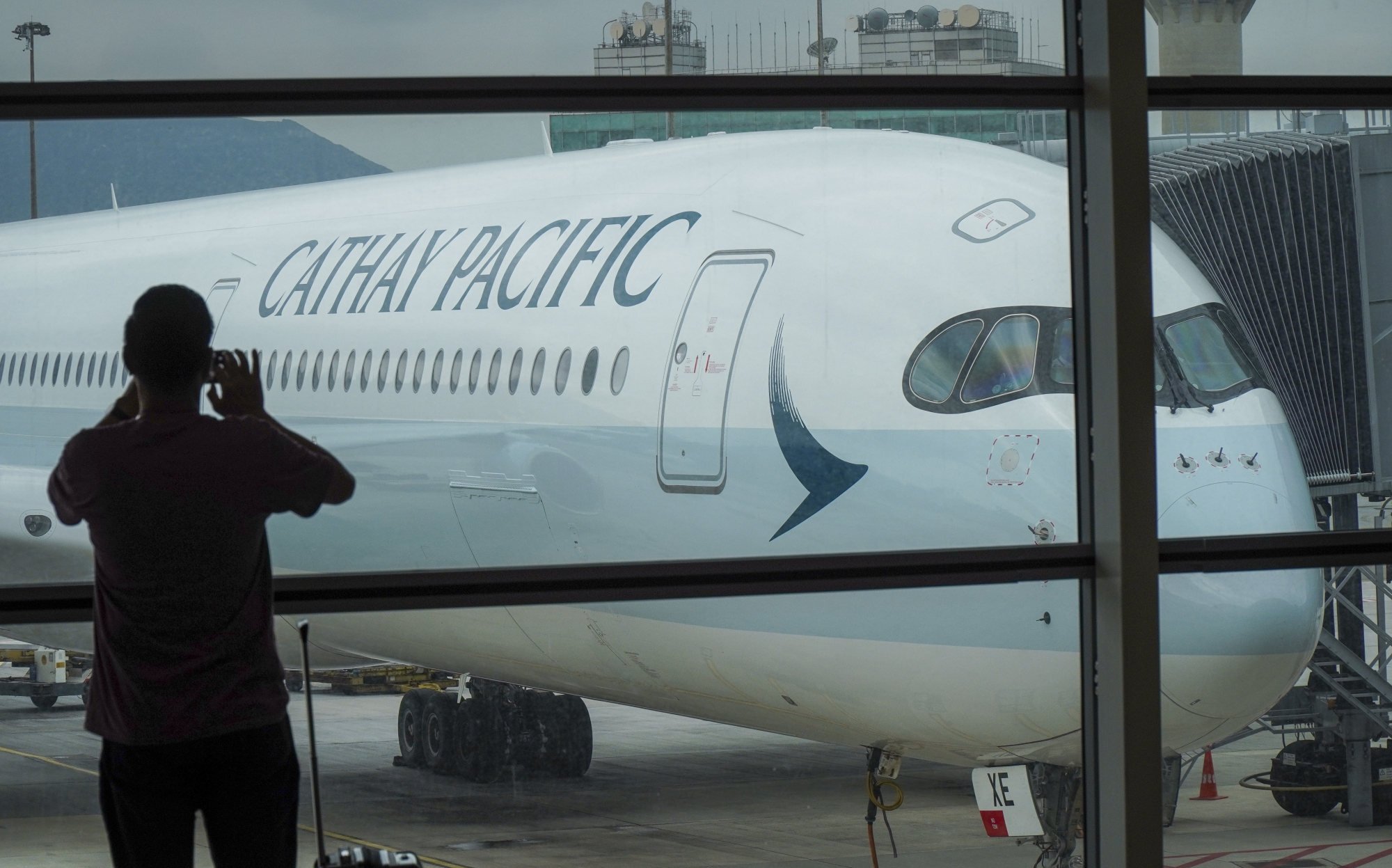 The airline employed around 2,600 pilots and 10,000 cabin crew locally out of a total workforce of 19,452 as of the end of 2020. Across the broader Cathay Pacific Group, which includes its subsidiary budget airline, cargo terminal and catering businesses, about 25,600 were employed.

A company source said there was no set target for how many volunteers for the redundancy programme it would require.

A Cathay Pacific spokeswoman confirmed the move to staff: “Based on requests from some of our employees, we have decided to offer certain of our employee groups (pilots, cabin crew and airport employees, etc) the option of a voluntary separation scheme. We are providing support to all those who apply, including a competitive exit package.”

Pilots who choose redundancy are being offered a lump sum equal to between three and six months’ salary, depending on the length of time they have been with the company. They will also get a one-time payment equivalent to twice their monthly housing allowance.

Cabin crew will get a similar offer to walk away: a payment equivalent to between two and six months’ salary, and extended travel and medical benefits.

Cathay Pacific was saved last June by a HK$39 billion bailout from the government, arranged by Financial Secretary Paul Chan Mo-po, but the despite the financial aid, the carrier has continued to cut staff.

Deborah McConnochie, Cathay’s general manager for aircrew, told pilots in a memo: “Our working environment remains incredibly challenging, and the Covid-19 pandemic continues to have a devastating impact on our business.”

She cited the rising number of coronavirus cases, especially those tied to new mutant strains, as a factor for restricting the number of flights the airline could operate worldwide. Given that bleak outlook, the company was now seeking volunteers to walk away from their jobs, she said.

Jeanette Mao, the airline’s general manager overseeing in-flight service, including cabin crew, added: “We are still in a very dynamic situation and we will continue to undertake measures to help manage our position and remain agile in our response.”

In the memo, the airline said the voluntary separation scheme was open to all pilots with more than six months until retirement. Pilots were told they would have two weeks until May 12 to sign up, with employment to cease by May 31 for those opting in.

Mao went on to say voluntary redundancy was being offered to “frontline teams” working at Hong Kong International Airport as well.

“While the departure of our valued colleagues is not something we hoped to see, we thought it would be worthwhile to provide an option for people who would like to leave us for personal reasons or to pursue other opportunities,” she said.

The carrier is still burning as much as HK$1.9 billion a month as the pandemic continues to strangle global travel.

Cathay Pacific was one of the first and hardest hit by the pandemic. Without a domestic flight network, it is reliant on cross-border travel, which remains largely non-existent due to travel restrictions.

The carrier is grappling with a surplus of pilots – particularly for its Boeing 777 fleet – as most of its passenger aircraft remain grounded, according to sources.