IPOH, April 26 (Bernama): A songkok maker, Hamzah Irzal, is one of the small traders who find it hard to eke out a living, as the country is still reeling in the fight against Covid-19, with only about 200 orders received for his traditional headgear thus far, with the Aidilfitri celebration just 16 days away.

This scenario is far from previous years, prior to the pandemic, when Hamzah, 52, of Pustaka Al Jilani, received orders in the thousands.

Hamzah who has made, supplied and sold songkok to wholesalers and individual customers since 2008, said that the wholesalers, especially those trading at the Ramadan bazaar sites, were reluctant to order the products in large quantities due to the possibility of the Movement Control Order (MCO) being implemented again.

"The orders I have received this time around are mostly online, such as Facebook and Instagram, as well as Shopee. "The wholesalers are worried that if the MCO is implemented, business will not be allowed to operate, that it will cause losses, apart from many may not be in the mood to celebrate because they are not allowed to balik kampung (to celebrate Aidilfitri), ” he said when met at his premises at the UTC Building here.

However, Hamzah said that he was grateful that his move to market his products abroad showed some positive results, as he had received orders from customers in Brunei and Indonesia.

He said that he also discovered that there were those who tried to produce imitations of his products in these two countries, particularly one of his most exclusive products, Kopiah Hafiz or Kopiah Imam.

"This Kopiah Imam, produced using similar material as a turban and priced at RM80 per unit. It usually comes in maroon in colour, complete with strings. In addition to adults, I also produce for children at tahfiz schools, ” he said.

In the meantime, he also expressed concern that songkok making is slowly becoming extinct in the country as many young people were not interested in craft, based on his observation at classes he previously conducted at the Seri Iskandar National Youth Skills Institute (IKBN), Perak Tengah. - Bernama 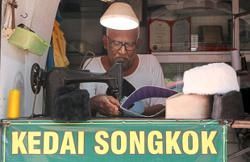