Buses stand by to transport migrant workers to a government quarantine facility after workers were tested positive for Covid-19 at Westlite Woodlands dormitory in Singapore on April 22, 2021. - Reuters

SINGAPORE (Bloomberg): Singapore has discovered more virus cases in a foreign worker dormitory that was within the epicentre for the Covid-19 outbreak in the country last year, raising concerns about reinfections as almost all the labourers had previously tested positive.

To stop the potential spread at the Westlite Woodlands dorm, more than 1,100 people living in the same block as the infected workers were recalled from work and will be sent to a government quarantine facility for 14 days, according to a letter, signed by the dormitory’s manager to clients on Wednesday, that was seen by Bloomberg News.

"The situation is still unfolding,” the dormitory’s operator, Centurion Corp. Ltd, said in a statement on Thursday (April 22), declining to provide further detail or confirmation on the number of residents who have tested positive for Covid-19. The firm confirmed the authenticity of the letter.

Earlier in the week, the government said a 35-year-old Bangladeshi migrant worker staying at the dormitory tested positive for the virus, despite having received both doses of vaccine. This prompted the government to isolate and quarantine his close contacts at the dorm and workplace.

In a statement from the manpower ministry on Thursday, it said one person under quarantine, who is a roommate of the 35-year-old worker, was found to be infected. Virus testing was then conducted on all residents at the dormitory as a precaution. So far, 17 recovered workers were tested positive, the health ministry said in its daily preliminary virus update.

The health ministry, "together with an expert panel which comprises infectious diseases and microbiology experts, is investigating if they are re-infection cases, ” it said Thursday.

This development comes after many weeks of almost zero new cases among the labourers and thousands of them getting vaccinations. The dormitory, located on the far north side of Singapore, first reported a cluster of virus cases in April last year but this cluster was closed in October after no new cases were found there for 28 days.

Last year, Singapore confined hundreds of thousands of workers to their dormitories to prevent an outbreak in their ranks from spreading across the island. Though Singapore has largely managed to control the pandemic, and has one of the fastest vaccination rates in Asia-Pacific, concerns of reinfection are growing as new virus variants emerge and global cases tick up.

Singapore is reviewing border controls for travellers who recovered from the virus.

The country and Hong Kong called off an announcement planned for Thursday on an air-travel bubble, according to people familiar with the matter, the second time in five months the highly anticipated arrangement for quarantine-free travel between the two financial hubs has run into obstacles. 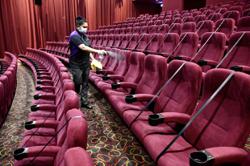