Indonesian marine police prepare to take part in the search operation for the missing submarine on April 22, 2021. - AFP

SINGAPORE (The Straits Times/ANN): Five Indonesian warships and a helicopter are scanning the waters off the resort island of Bali on Thursday (April 22) for a submarine with 53 crew which went missing during naval exercises.

The last spot where the submarine was detected was 23 nautical miles north of Bali, said the Indonesian Military (TNI) spokesman.

"The Indonesian Navy is currently carrying out a search for the last position the submarine was detected," Major-General Achmad Riad told a press conference from Bali's Ngurah Rai military airbase.

According to the defence ministry on Wednesday, the KRI Nanggala-402 was to carry out a torpedo drill after it asked for permission to dive early that day. However, it lost contact and could not be reached.

The search operation had begun on Wednesday shortly after the vessel failed to surface as stated in its training schedule, Major-General Achmad said.

"There were oil spills and the smell of diesel fuel in several different locations" he said, but these "could not be concluded to be fuel from the submarine".

Besides oil spills, an underwater movement at a speed of 2.5 knots was also detected.

According to the defence ministry, the Indonesian authorities had also sent out an international distress signal, and several countries including Singapore, Australia and India "have responded and are ready to provide assistance".

Major-General Achmad said Singapore will deploy the submarine support vessel MV Swift Rescue, which departed from Changi Naval Base on Wednesday afternoon and is expected to arrive on site on April 24.

Malaysia will also be sending a vessel, the MV Mega Bakti, which is scheduled to arrive on April 25.

The incident was believed to be the first major submarine disaster for Indonesia, which has been moving to upgrade its ageing military equipment in recent years.

The country in the past had a fleet of 12 submarines purchased from the Soviet Union, but now, it has five German and South Korean-built submarines, local media reported.

Indonesia ordered the 1,395-tonne KRI Nanggala-402 in 1977 from Germany, and the submarine joined the Indonesian fleet in 1981. It had undergone maintenance several times, the latest being in South Korea from 2007 to 2012, according to the TNI.

It is powered by four electric diesel engines, and has a speed of up to 21.5 knots when submerged and 11 knots when cruising on the surface. It also has the ability to carry up to 14 SUT torpedoes, TNI added.

Dr Connie Rahakundini Bakrie, executive director of the Institute of Defence and Security Studies, told MetroTV news channel that she appreciated the Indonesian authorities involving neighbouring countries in the search.

She said: "The faster the better, as we are racing against time." - The Straits Times/Asia News Network 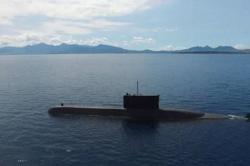