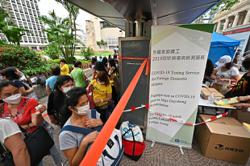 A couple has been sentenced to life in prison for murdering their five-year-old daughter three years ago in one of Hong Kong’s most horrifying cases of child abuse.

They were also on Tuesday given concurrent jail terms on two counts of child cruelty, which they admitted, for the ill-treatment and neglect of the girl and her then eight-year-old brother, who were both found with some 130 injuries, after she died of septicaemia on January 6, 2018.

The 29-year-old father, a transport worker, and the 30-year-old stepmother, a housewife, each received 9½ years for child cruelty. The maximum term for that offence is capped at 10 years.

The woman’s 56-year-old mother, an accounting clerk, was jailed for five years on two counts of the same cruelty charge, for neglecting the children when the five-month-long abuse was happening in her flat.

Child abuse in Hong Kong escalating because of pandemic: expert

The trio were convicted by a High Court jury last week following a month-long trial filled with heartbreaking testimonies revealing how the siblings were punished, assaulted and deprived of basic life necessities such as food and access to professional medical treatment, even as their wounds festered and affected daily functions such as sitting and walking.

Derek Lai Kim-wah, senior assistant director of public prosecutions, said the chronic abuse was a significant cause of the girl’s death because it weakened her immune system’s ability to fight the salmonella infection that eventually killed her.

That was reflected by the experts’ finding of the change in the girl’s thymus – a vital organ responsible for the production of white blood cells that fight salmonella – which had been reduced to its smallest size, despite it generally being at its largest in children her age, in response to toxic stress.

The court also heard how their schools had noticed some of the signs of abuse. Their handling of the case has renewed debates on how children can be better protected and prompted the government to revise measures and guidelines, as well as to provide more social workers for schools.

Mr Justice Albert Wong Sung-hau has issued a gag order barring the identification of the family members and schools involved, to protect the siblings and their then seven-year-old stepsister, who was not abused.

In mitigation, lawyers for the couple argued the abuse was “not the worst of its kind” given that it had happened in the course of disciplining the children.

They said the parents did not know how to seek outside support, while noting that there had also been “moments of joy” in the family.

The stepmother also acknowledged that she should bear “the most responsibility” for the girl’s death, when she was the primary carer.

Both parents had offered to plead guilty to manslaughter, a lesser offence that is also punishable by life in prison, but that was rejected by the prosecution.