A CULTURAL festival celebrating the Hung Kings, known as the country’s founders, began yesterday in Ho Chi Minh (HCM) City and Thu Duc City. The event opened with a series of traditional games and sports, and cooking competitions at the Hùng Kings memorial area located in the Park of Culture and National History in Thu Duc City.

The main ceremony commemorating the anniversary of the kings’ death will begin on the 10th day of the third month of the lunar calendar, which falls tomorrow this year.

It will include incense-offering rituals dedicated to the Hùng Kings, the National Father Lac Long Quan and National Mother Au Co, hosted by officials from the People’s Party Committee, People’s Committee and Motherland Front Committee.

A special exhibition of pictures and ancient objects featuring the country’s history and culture in different periods is being held.

Folk music and martial arts performances, staged by leading traditional art troupes, will be featured during the ceremony.

Vietnamese songs and instrumental music pieces will be performed. Patriotism, peace, love, youth and spring will be the shows’ themes. In HCM City, a youth camp called Tu Hao Noi Giong Tien Rong (Proudly Our Legends) with university students will open at 8am on Thursday at the Tao Dan Cultural Park in District 3.

As per tradition, Suoi Tien and Dam Sen parks in districts 9 and 11 will hold events for visitors to pay tribute to the Hung Kings.

Many books will feature topics on Vietnamese history and culture.

“I always visit Tao Dan Park on Hung Kings Memorial Festival every year to offer flowers and incense to commemorate the kings.

“I wish good health for my family members and prosperity for the whole country, ” said Ly Van Chung, a resident of HCM City. — Vietnam News/ANN 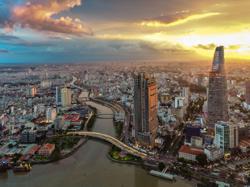