The victims, part of a larger student group from a local school in Khanh Hoa's Cam Ranh city, went to the beach for a bath on Sunday afternoon.

They were swept away by the strong waves and drowned in deep water, the news agency cited local authorities as saying.

Bodies of the victims were found as of Monday morning.

The report said drowning incidents occur every year in the area, so the locality has put several warning signs along the beach to keep people alert.

An average of 2,000 children in Vietnam die of drowning every year, making it the leading cause of injury-related deaths for children in the country, according to the country's Ministry of Labor, Invalids and Social Affairs.

Meanwhile, Vietnam recorded three new cases of Covid-19 infection late on Sunday (April 19), raising the total confirmed cases in the country to 2,784, according to the country's Ministry of Health.

The new cases are all Vietnamese citizens who recently entered the country from abroad and were quarantined upon arrival, said the ministry.

As many as 2,475 patients have been given the all-clear as of Sunday, the ministry said, adding that over 40,400 people are being quarantined and monitored. - Xinhua
Article type: metered
User Type: anonymous web
User Status:
Campaign ID: 46
Cxense type: free
User access status: 3
Join our Telegram channel to get our Evening Alerts and breaking news highlights 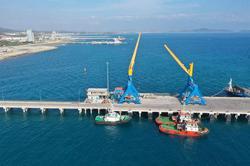