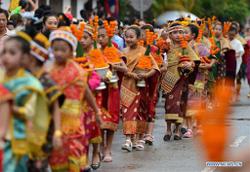 VIENTIANE April 19 (Vientiane Times/ANN): Lao people living in the country and overseas last week celebrated Lao New Year (Pi Mai Lao) in a relatively restrained atmosphere, due to restrictions imposed because of Covid-19, but things were livelier in some of the provinces.

Celebrations on the streets and in public places were banned in the capital, but elsewhere loud music was played and people turned out to take part in traditional activities.

evelry in Vientiane was curbed by instructions from the Prime Minister’s Office to limit the celebrations to traditional rituals.

This was aimed at preventing large gatherings and keeping people safe as concerns over the spread of Covid-19 escalated when a fresh case of the virus was confirmed in Vientiane on April 11. As a result, all forms of outdoor entertainment such as street fairs, Miss Lao New Year beauty contests and processions, shows and concerts in public places were banned.

Despite these restrictions, families gathered for three days of fun and traditional activities from April 14-16, with many visiting their parents, older relatives and friends to ask for and to bestow good wishes for the coming year.

Most of the city’s streets were free of the usual raucous activity typical of previous years, with Fa Ngum and Sihom roads almost empty of people and vehicles.

A few people broke the rules and held street parties but in the main Vientiane residents complied with government guidelines and held parties at home rather than seeking entertainment further afield.

But the scene was different outside the capital and street parties took place as usual with loud music and dancing marking people’s boisterous enthusiasm for the occasion.

Other popular visitor destinations such as Champassak province and Vangvieng district were also crowded, despite fears of a Covid-19 outbreak. Tightened restrictions discouraged many people from travelling long distances as they feared for their wellbeing and were keen to comply with government guidelines to keep the virus in check.

Apart from street parties, other activities enjoyed nationwide included pouring water on Buddha images at temples and cleaning houses in order to dispel any lingering misfortune from the past year.

Young people sprinkled water on the hands of their elders and asked for their blessings for the year ahead, as part of age-old customs that take place each year in households all across the country.

Lao New Year is the highlight of the Lao calendar and is a time to celebrate Lao identity, strengthen family bonds, engage in much-loved rituals, and anticipate a bright year ahead. - Vientiane Times/ANN 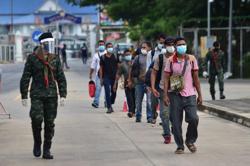 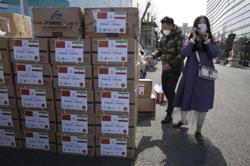