JAKARTA, April 19 (Xinhua): The Indonesian government has extended its community activity restrictions (PPKM) until May 3 and expanded it to five more provinces, according to an official on Monday.

"Based on the evaluation, the previous five restrictions succeeded in reducing the number of Covid-19 cases, and then we extended it again," Coordinating Minister for Economic Affairs Airlangga Hartarto said.

The bed occupancy rate in hospitals currently ranges between 34 and 35 per cent. The five provinces that are currently enforcing the restrictions are West Sumatra, Jambi, Bangka Belitung, Lampung, and West Kalimantan.

According to the ministry, 6,349 more people were discharged from hospitals, bringing the total number of recovered patients to 1,461,414. 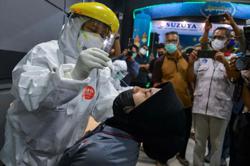