HANOI, April 18 (Xinhua): An event on the exchange between Vietnamese and Chinese folk music culture was held on Saturday night (April 17) in the Vietnamese capital Hanoi.

Hosted by the Confucius Institute at Hanoi University, the event featured performances by Vietnamese students of the two countries' folk music, including adaptations of famous Chinese and Vietnamese folk songs and Quan Ho singing, a traditional Vietnamese music style that entered the Intangible Cultural Heritage list of the International Educational, Scientific and Cultural Organization (UNESCO) in 2009.

"In the time of global integration, there is a greater need for young people to learn and promote the folk songs and culture from different ethnic groups," said Dinh Thi Thanh Nga, head of the department of Chinese language at Hanoi University, at the event.

Such an exchange of Vietnamese and Chinese folk songs would help the peoples of the two countries know each other better, deepen the friendship between the countries, and facilitate the multi-dimensional cooperation within the region, Nga said.

Peng Shituan, cultural counselor of the Chinese Embassy in Vietnam, attended the event. 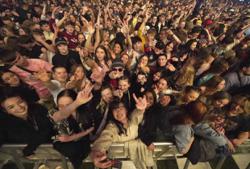