An activist has raised US$108,000 (RM445,000) he owes Prime Minister Lee Hsien Loong in defamation damages, the second time this month a government critic turned to the public to fund payments to the premier.

Critics have accused the government of seeking to silence dissent in the tightly regulated city-state through costly libel suits, but activists are fighting back by appealing to the public for donations through social media.

Roy Ngerng (pic), a former government employee, was found guilty in 2014 of defaming Lee after accusing him in a blog of misappropriating state pension funds.

Ngerng, who now lives in Taiwan, made online appeals for donations to cover the S$144,000 (RM445,000) that he still owes the prime minister after another blogger successfully raised a similar amount earlier this month.

Ngerng announced on Friday that he met his goal over nine days of crowdfunding, with more than 2,000 people donating.

“After seven long years, you have come together to help me cross this hurdle, and move on into a next chapter of my life, ” he wrote in a post on Facebook.

“I cannot thank you enough.”

Ngerng previously raised more than S$112,000 (RM346,000) through crowdfunding, but spent the money on legal costs during his defence.

Another blogger, Leong Sze Hian, was ordered to pay S$133,000 (RM411,000) in damages after being found guilty of defaming the prime minister by sharing an article on Facebook which linked the Singaporean leader to the money-laundering scandal at state fund 1MDB in Malaysia.

Leong successfully raised the amount in an online crowdfunding campaign earlier this month, but he said on Thursday he must pay an additional amount of almost S$130,000 (RM401,000) in legal costs.

Singapore has consistently ranked highly in surveys as one of the world’s least corrupt countries.

Singaporean leaders maintain that the lawsuits are necessary to protect their reputations from unfounded allegations. — AFP 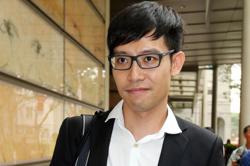