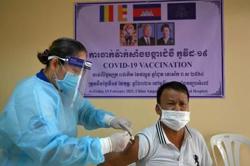 A police officer stops motorists to check their documents at a checkpoint during a 14-day citywide lockdown implemented amid a rising number of Covid-19 cases, in Phnom Penh, Cambodia,on April 16, 2021. - Reuters

PHNOM PENH (Xinhua): Cambodia on Friday (April 16) confirmed 262 new Covid-19 cases and two more fatalities in the past 24 hours, the country's Ministry of Health (MoH) said in a statement.

Of the new cases, 232 were found in the capital Phnom Penh, 12 in Preah Sihanouk province, four in Kandal province, two each in Kampong Cham, Prey Veng, Pursat, Siem Reap and Takeo provinces, and one each in Kampong Speu, Kampong Thom, Svay Rieng and Tboung Khmum provinces, the statement said.

The new deceased patients included a 77-year-old man living in Phnom Penh and a 65-year-old man residing in Kampong Speu province, it added.

MoH's secretary of state and spokeswoman Or Vandine on Friday renewed her calls on people to strictly follow heath safety guidelines after the kingdom imposed a two-week lockdown in Phnom Penh and its neighboring Ta Khmau city on April 15-28.

"We must act together to fight the Covid-19 virus for a better tomorrow, a better year, and a better future," she said. "Stay safe, stay home."

Since the start of the pandemic, the Southeast Asian country has logged a total of 5,480 confirmed Covid-19 cases with 38 deaths, the MoH said, adding that there are currently 3,044 active cases in the kingdom.

As of Thursday, more than 1.22 million out of the country's 16 million population had been vaccinated against the virus, showed a government report.