SINGAPORE (Bloomberg): One of Asia’s busiest ports is preparing for an influx of ships after a week-long blockage at the Suez Canal.

Logjams and delays are expected to worsen in Singapore, which already has 83 container ships waiting in queue, according to supply chain data provider project44. Those ships represent more than 299,000 twenty-foot equivalent units, with at least another 370,000 en-route to Singapore, project44 data showed.

"The first wave of container vessels from the Suez Canal have arrived in Singapore,” the Port of Singapore Authority said in a statement. Terminal operators have prepared more berths, equipment and workers to increase container-handling capacity, said Quah Ley Hoon, chief executive of the country’s Maritime Port Authority.

Major ports around the world from Europe’s Rotterdam to Port Klang in Malaysia are bracing for more traffic after the Ever Given was stuck in the Suez Canal for more than six days, affecting over 400 vessels carrying everything from livestock to mattresses. Other major ports impacted are New York and Jebel Ali, although they won’t see as large a surge as Singapore, according to project44. 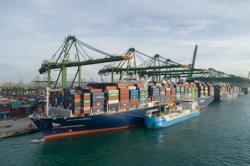