MACAU (Bloomberg): Macau has moved a step closer to the potential introduction of a digital currency as it seeks to better combat money laundering and tax evasion in the world’s biggest gambling hub.

The government plans to amend laws to regulate the issuance of a virtual legal tender, Chief Executive Ho Iat-seng told lawmakers Tuesday (April 13). The government will work with China’s central bank to "study the feasibility of issuing a digital currency, ” he said.

Although no formal plans have been announced on whether or how a digital currency would be implemented, some junkets -- businesses that act as middlemen for Chinese high-rollers who make up half the city’s gambling revenue -- are worried the imposition of a traceable, government-linked currency will be the death knell for an industry already hobbled by the virus and stricter rules around high-stakes gambling.

A number of casino operators have been approached by Macau’s regulator to discuss the feasibility of using a digital yuan to buy gambling chips, Bloomberg News reported in December.

The aim of introducing a virtual currency is to improve effectiveness in reducing money laundering, tax evasion and terrorism financing, according to Ho.

The plan comes amid a slow recovery from the slump in casino revenue caused by the pandemic travel curbs that kept lucrative Chinese gamblers away.

Casino analysts still need more details to evaluate the impact of the potential launch of a digital yuan. The mandatory use of a digital currency as the only option for buying gambling chips would be negative for Macau casinos by essentially eliminating the junket system, according to an earlier note by Sanford C. Bernstein analysts led by Vitaly Umansky

However, it would be a long-term positive, especially for the premium mass-market, if a digital yuan becomes one of the options that offer easier access to money in the city, the analysts said.

A Bloomberg index of Macau casinos rose 0.2% at the noon trading break in Hong Kong on Wednesday, trailing the benchmark Hang Seng’s 1.2% gain.

The People’s Bank of China has triailled a digital yuan in several cities, putting it on track to be the first major central bank to issue a virtual currency.

A broader rollout is expected for the Winter Olympics in Beijing in February 2022, giving the effort international exposure. The development of a digital yuan has raised US concerns of a potential threat to topple the dollar as the world’s reserve currency in the long term. 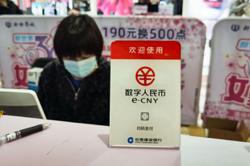