A Muslim woman buys iftar, the meal with which Muslims end their daily Ramadan fast at sunset, at a street-side stall during the first day of Ramadan in Medan, North Sumatra, Indonesia, Tuesday, April 13, 2021. Muslims around the world are observing Ramadan, the holiest month in Islamic calendar, where they refrain from eating, drinking, smoking, and sex from dawn to dusk. - AP

JAKARTA, April 13 (Bloomberg): Indonesia will keep using the vaccines developed by China’s Sinovac Biotech Ltd. and U.K.’s AstraZeneca Plc. to curb the spread of Covid-19 because they met the standards set by the World Health Organisation, according to the government.

WHO has endorsed the vaccines as safe and have sufficient efficacy rates, spokesperson for the Health Ministry Siti Nadia Tarmizi said by phone on Monday. "We can assure you that the vaccines are safe, beneficial and able to boost our immunity.”

Concern is mounting that China’s Covid-19 vaccines are less effective in quelling the coronavirus disease than other products, after remarks by the head of the Chinese Centre for Disease Control and Prevention about their lower protection rate went viral on social media.

Indonesia, the worst infected country in South-East Asia, is counting on the shots to be able to inoculate more than 180 million people within a year to achieve herd immunity levels.

No significant side effect has been reported from the use of AstraZeneca vaccine in Indonesia, said Tarmizi.

Research released Sunday showed the efficacy rate for Sinovac’s vaccine, deployed in Indonesia and Brazil, was just above 50%. Shots developed by Pfizer Inc. and Moderna Inc. have delivered protection rates of more than 90%.

Indonesia will wait for the Chinese government’s move on the potential for mixing different types of vaccines to boost their efficacy rates, Tarmizi added.

The country’s food and drug regulator "BPOM will continue to monitor the vaccines, but the best vaccine is the one that’s available,” she said.

According to the ministry, 6,349 more people were discharged from hospitals, bringing the total number of recovered patients to 1,426,145. 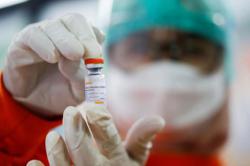 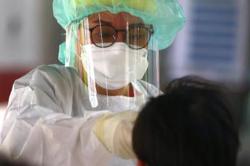