HANOI/SHANGHAI, April 13 (Reuters): A larger number of Asian countries and economies could join the ranks of those branded currency manipulators by the U.S. Treasury in the coming days, and yet that prospect is barely causing any concern in the region.

The US Treasury's semi-annual assessment of countries it deems are outright manipulators or should be on watch-lists for such behaviour is due as soon as this week.

Vietnam, which was named a manipulator for the first time in Treasury's December report, appears to have continued intervening in currency markets and may stay on the list.

Thailand and Taiwan could also be named as manipulators this time. Others, including China, Japan, South Korea, Germany, Italy, Singapore, Malaysia and Hong Kong, are likely to join or remain on the Treasury's 'monitoring list' of countries that meet some of the criteria for being labelled as currency manipulators. "With most of the U.S. major trading partners in Asia either being labelled a manipulator or on the monitoring list, there is now less stigma associated with being called out by the US Treasury," said Khoon Goh, head of Asia research at ANZ in Singapore.

A 2015 U.S. law which can lead to sanctions, bases the manipulator designation on three criteria - a US$20 billion-plus trade surplus with the United States, currency intervention exceeding 2% of gross domestic product and a current account surplus exceeding 2% of GDP.

The label of currency manipulator does not automatically bring any punishment, however, and the US law only requires Washington to demand negotiations with designated countries.

The April report will be the first since Janet Yellen was appointed by U.S. President Joe Biden to lead the Treasury.

While not counting on it, analysts such as Goh wonder if the new administration will make allowances for the effects of the coronavirus pandemic, loose U.S. monetary policies and the U.S.-China trade war in distorting trade balances and currency values in Asia.

"We doubt that the U.S Treasury will get far from their bilateral engagements unless there is recognition of the role that U.S. policies have played in the first place," ANZ's Goh said in a note. The Treasury allows itself plenty of discretion. China, for instance, became the first country to be properly named a manipulator at the height of the trade war in 2019, even though it didn't meet all the three criteria.

This time, despite a massive current account surplus in 2020, China's FX reserves have barely risen. The yuan has steadied over the past six months, and rising dollar balances at local banks have analysts suspecting that they are massaging the flows in the central bank's stead.

Switzerland, a first-time manipulator in the December report, could escape that tag because it appears to have scaled-back intervention this year, although it might remain on the monitoring list.

Vietnam has benefited from a shift in exports and manufacturing of electronics and other goods from China after its trade war with Washington. Since December, when it was labelled a currency manipulator, Vietnam's central bank has used special currency swaps to keep its dollar-buying intervention off the books for a while.

Nguyen Tri Hieu, a former Vietnam government advisor, believes authorities in the Southeast Asian country do worry about the possible damage to its reputation and exports from being named a manipulator.

"I don't think Biden administration would remove Vietnam from the currency manipulator list in the short term. Instead, the U.S. will use it as leverage in further negotiations with Vietnam, but no sanctions or taxes will be levied," Hieu said.

Policymakers in Taiwan say they have observed that countries already tagged by the United States, such as Vietnam, have not felt any impact. 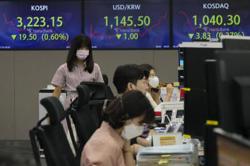