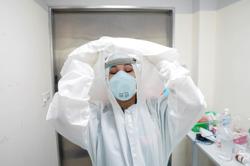 BANGKOK, April 13 (The Nation Thailand/ANN): The latest wave of Covid-19 reported in Thailand since late March would affect people’s travel plans during Songkran Festival and cost the tourism industry around Bt10 billion in revenue in the second quarter of 2021, Kasikorn Research Centre (K-Research) said on Tuesday.

“During the third wave, there are a higher number of cluster cases found in Bangkok and the outbreak has spread to several provinces faster than the previous waves,” said the centre.

“This has resulted in many people cancelling their domestic trips during the Songkran holidays between April 10 to 18, affecting the projected revenue of the hospitality and guided tour industry, as well as other tourism-related businesses.”

K-Research also slashed its estimate of total tourism revenue in the first half of the year by Bt130 billion -- to Bt137 billion -- after forecasting Bt267 billion in January, due to the second and third Covid-19 waves in late December and late March.

“The third wave could last longer than the previous ones due to the higher number of infections and the discovery that the mutated strain of the virus can spread faster,” added the centre.

“Furthermore, the economic fallout will be more serious than the previous waves as the third wave has a central hotspot in Bangkok, the province with highest value of economic activities.”

K-Research advised the government to accelerate vaccination to cover as many citizens as possible, as well as seek alternatives in vaccine procurement from other parties.