A doctor receives a dose of the AstraZeneca vaccine against the coronavirus disease (Covid-19) during an organised media visit to the vaccination at Taoyuan Hospital in Taoyuan, Taiwanon April 12, 2021. - Reuters

BEIJING, April 13 (Reuters): China on Tuesday urged the United States to refrain from playing with fire on the Taiwan issue, after it issued new guidelines that will enable U.S. officials to meet more freely with officials from Taiwan.

On another matter, aiwan's exports rose for a ninth straight month in March, and far exceeded expectations, as global demand for microchips and hi-tech gadgets remained strong in the work-from-home Covid-19 pandemic boom.

Exports rose 27.1% from a year earlier to $35.89 billion in March, the Ministry of Finance said on Friday, the highest monthly figure on record.

Analysts in a Reuters poll had forecast a rise of 17.4% for March, compared with a 9.7% increase in February.

The ministry attributed the growth to a return of economic confidence as countries around the world roll out vaccination programmes, and to continued strong demand for tech products to support remote working and the "home economy".

Firms such as Taiwan Semiconductor Manufacturing Co Ltd (TSMC) are major suppliers to Apple Inc and other global tech giants, as well as providers of key chips for auto companies and lower-end consumer electronics.

Beatrice Tsai, head of the ministry's statistics department, told reporters that TSMC, the world's largest contract chip manufacturer, would be running at full capacity until the end of next year.

TSMC declined to comment ahead of its first quarter earnings next week. It said this month it plans to invest $100 billion over the next three years to increase capacity at its plants. 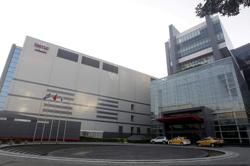