Gregor Gregersen, founder of Silver Bullion Ltd., at the third floor of The Reserve vault, owned by Silver Bullion, in Singapore, on Friday, Feb. 19, 2021. The vault is holding around 400 tons of silver at the moment -- when completed in the first half of next year it will be able to store 15,000 tons -- the capacity investments are an indication that silver might be on the cusp of a promising few years. - Bloomberg

SINGAPORE, April 12 (Bloomberg): Inside a six-story high warehouse near Singapore’s Changi airport, a vast hangar-like space is waiting to be filled with a precious metal that usually plays second fiddle to its more lustrous sibling.

The vault that’s being built by Silver Bullion Pte Ltd. will -- when completed in the first half of next year --- be able to store 15,000 tons of silver. It’s only holding around 400 tons of the metal at the moment, but the vacant space is an indication that silver appears to be on the cusp of a promising few years.

Demand for coins and bars is booming, fueled in part by a Reddit-induced buying frenzy in February that drove prices to an eight-year high. While the fervor has abated, retail interest is still elevated, valuations are relatively cheap and measures are being taken to meet the surge in demand. The amount of silver stored in vaults in London rose 11% in March to a record, according to the London Bullion Market Association.

As well as the Singapore vault, JM Bullion, one of the biggest precious metals retailers in the U.S., plans to open a 25,000-square-foot-warehouse in Dallas in June that will be used for storing silver and other precious metals.

The metal’s crucial role in the energy transition -- it’s a key component in solar panels -- also looks set to buoy consumption over the longer-term. All this has some analysts forecasting that silver will outperform gold this year.

"The outlook for demand growth for silver over the next few years looks very positive, especially across a wide range of industrial applications, including solar, 5G and automotive,” said Philip Klapwijk, managing director of Hong Kong-based consultant Precious Metals Insights Ltd. "That, coupled with ongoing high levels of investment is likely to create the need for more dedicated storage space for silver in bullion and also intermediate forms.” Gregor Gregersen, founder of Silver Bullion, said he started searching for a bigger warehouse two or three years ago and that decision was vindicated last year when demand for the metal surged during the coronavirus pandemic. "The idea is to make this into a really iconic building,” he said during a tour of the vault that will be known as The Reserve. "There isn’t really a facility built specifically to store large quantities of silver securely.”

Singapore has a reputation as a stable financial center and has taken steps to position itself as a bullion hub, exempting investment-grade gold, silver and platinum from a goods and services tax.

Physical investment in silver, which covers bullion coin and bar purchases, is expected to reach a six-year high of 257 million ounces in 2021, according to the Silver Institute.

Spot silver, currently trading around $25 an ounce, is forecast by Citigroup Inc. to peak at $28 to $30 in the second half, aided by "still solid” investment demand and an end to physical de-stocking in China and India. The lender sees the price averaging $27.30 this year. Morgan Stanley, meanwhile sees the metal averaging $25 an ounce in 2021, up 22% from last year.

Gold, meanwhile, is stabilizing after its first quarterly loss since 2018 amid high bond yields and optimism over the global economic recovery from the pandemic that’s damping demand for the metal. Citi sees gold, currently fetching around $1,740 an ounce, falling to $1,575 in six to 12 months.

Sill, there’s no shortage of silver. The Silver Institute expects the global market to remain in a surplus this year, although it sees the lowest excess since 2015. And even against a backdrop of strong electronics and automotive demand as well as growing solar power investment, silver’s failure to break higher suggests the gold price, real yields and the U.S. dollar remain powerful drags, Morgan Stanley said in a note. 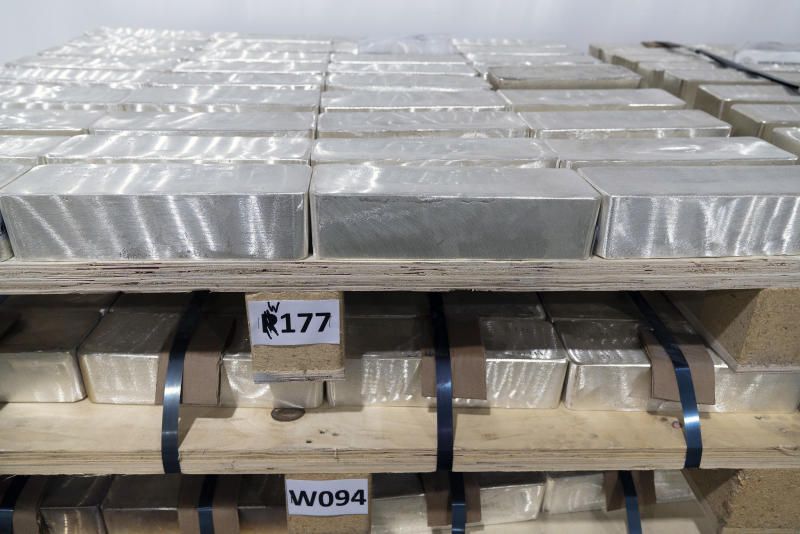 "Considering the high correlation of silver to gold, and our bearish outlook for the yellow metal over the next 12 months, we expect silver together with gold to continue to struggle amid higher real interest-rate expectations in the U.S.,” said Giovanni Staunovo, a strategist at UBS Group AG.

JM Bullion Chief Executive Officer Michael Wittmeyer is more optimistic. The Reddit-fueled buying frenzy caused a spike in demand from existing silver bugs as well as bringing in a lot of first-time investors in the metal, he said. "We’re just trying to expand our capacity so that next time this happens, we’ll be able to get all these orders shipped more quickly.”

The accelerating move away from fossil fuels should also provide an enduring tailwind for silver demand as investment in solar power ramps up. China, Japan and South Korea all set carbon zero targets last year, while the U.S. is considering emissions cuts of 50% or more from 2005 levels by 2030.

The energy transition demand should give prices an extra boost, said CPM Group analyst Rohit Savant. Silver will average $27 this year and beat gold due to its relatively cheaper valuation and strong investment demand, he said.