Debate: Should Japan be allowed to release nuke wastewater into Pacific Ocean? 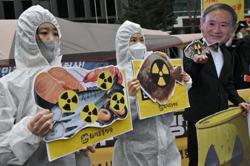 Last year, Japanese media reported that the Japanese government planned to release the contaminated water from the Fukushima nuclear power plant into the Pacific Ocean after treatment. This raised grave concerns worldwide. Last week, it was reported the government would make its decision this week. China and South Korea have voiced concern.

The earthquake and tsunami that battered the Fukushima Daiichi nuclear power plant on March 11,2011, triggered meltdowns in three of its six reactors, which left clutters of intensely radioactive fuel loose in the reactor buildings, with 150 tons to 400 tons of groundwater entering the reactors every day through cracks in their foundations and becoming contaminated with radioactive isotopes. As a result, by September this year, 1.23 million tons of water had accumulated in the storage tanks that the Tokyo Electric Power Corporation, the operator of the Fukushima plant, has built to store the contaminated water.

Since the current storage capacity will be full by the summer of 2022, and if no new storage facilities are built, the cost-effective way to dispose of the contaminated water would be to dilute and then discharge it into the sea, according to Japan's Ministry of Economy, Trade and Industry.

But whether the diluted wastewater meets the standards to be discharged into the sea should be determined by experts of authoritative agencies such as the International Atomic Energy Agency instead of Japanese experts, as it will have wide and far-reaching impacts on the marine environment and thus could harm human life.

As a signatory to the United Nations Convention on the Law of the Sea, Japan is obliged to protect the marine environment. According to the convention, signatory countries should not, directly or indirectly, dump substances into seas and oceans that could harm or are likely to damage the ocean's bio-system and thus harm human health, hinder marine activities, or damage the marine environment.

To put it simply, Japan should not discharge nuclear wastewater into the sea, because by so doing it would cause damage to marine life beyond its maritime territory.

If indeed Japan decides to discharge the contaminated water into the sea, it should submit all relevant information to the countries that could suffer damage so they can take measures to prevent any potential contamination threat to the marine environment.

The discharge of nuclear wastewater into the sea is not just a domestic issue for Japan; it concerns the entire international community.

(Jin Yongming is a professor at Ocean University of China)

Media reports saying the Japanese government may discharge contaminated water from the Fukushima nuclear power plant into the sea have raised concerns across the world, with some arguing that it would harm marine life in and the bio-system of the Pacific Ocean－and people who consume contaminated seafood from the ocean could suffer permanent health damage.

Many people have criticized Japan's policy, saying it could harm people around the world, and make other countries pay the cost of the Japanese government's irresponsible behavior. Some have even questioned Japan's right to unilaterally decide issues related to radioactivity which could affect the entire world.

Perhaps the Japanese government has been mulling to release the contaminated water into the sea because it cannot spend more money to store the huge and increasing volume of wastewater.

However, Japan's potential move is opposed by the international community, especially environmental activists and civil society.

There is no doubt that nuclear wastewater is very harmful. And treating such wastewater is a major problem and costly affair, especially if a huge volume of wastewater has accumulated in nuclear plants damaged by accidents.

Modern science can help dilute and coagulate sedimentation－that is, reduce the radioactive isotopes－in the wastewater but cannot eliminate all the radioactive substances from the water. Also, such methods are expensive and can only treat water with low levels of radioactive elements.

But it is difficult to sell the idea of dumping tons of radioactive water into the sea to the international community, especially after whatever faith the Japanese public had left in the Tokyo Electric Power Corporation took a beating in the first couple of years following the meltdowns, when several probes forced it to admit it had underreported the amount of radiation released during and after the 2011 accident.

Besides, dumping the wastewater into the sea may be the cheapest way to dispose of it, but by so doing Japan will pollute the marine environment, which would affect other countries.

Japan has the option of drilling wells 2,500 meters deep and dumping the wastewater into them.

Although nuclear wastewater remains contaminated even after being stored in secure tanks 2,500 meters below the Earth's surface, it is less likely to contaminate underground water which humans use for drinking and other purposes. But storing wastewater at a depth of 2,500 meters is a costly affair that requires huge investment, which Japan alone cannot afford.

Therefore, China, the United States, Germany, France and other global high-tech and engineering powers should help Japan to overcome the challenge and ensure the safety of human beings around the world.

The views don't necessarily reflect those of China Daily. 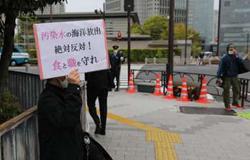 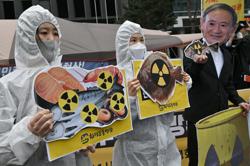