The two prime ministers reached the consensus during a bilateral meeting held via a video conference, the statement said.

"The two prime ministers expressed their mutual satisfaction for the cordial relations between the two countries based on the bond of traditional friendship and good neighborliness," the statement said.

"They agreed to expedite the finalization of the draft partnership action plan in order to further strengthen their close ties of cooperation in the field of political-security, trade, investment, education and culture," it added.

Both leaders noted their satisfaction on the significant increase of bilateral trade, which had grown from a mere US$10 million in 2019 to US$104 million in 2020, the statement said, adding that to boost investment in both countries, they agreed to expedite the negotiation of the Agreement on the Avoidance of Double Taxation.

On the COVID-19 pandemic, both leaders stressed the need to strengthen their joint collaboration to combat the disease and address its adverse impacts, it said. 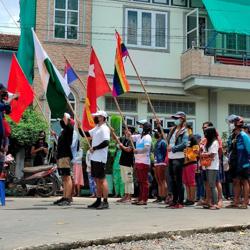