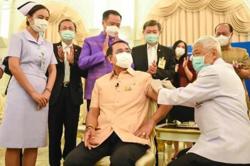 Bangkok, April 11, 2021 (AFP); Almost 40 Thai provinces have brought in entry restrictions and quarantine requirements for people travelling from Bangkok and other coronavirus hotspots ahead of a holiday travel period, as the capital grapples with soaring infections.

On Sunday the government announced 967 new infections, bringing the overall tally to more than 32,000. It was the highest number Thailand has reported on a single day since the outbreak in 2020.

Separately, health officials in the northern city of Chiang Mai flagged a further 281 cases that were likely to be included in Monday's national figures.

Bangkok appears to be the epicentre of Thailand's third wave, with more than 1,000 cases reported this month.

More than 4,000 people are in hospital with coronavirus across the country.

Bangkok has set up 10 field hospitals to accommodate up to 3,000 patients for Thailand's "most severe outbreak", according to Suksan Kittisupakorn, director-general of the Medical Service Department. Tourists walking around the Pattaya beach to fly kites or watch professional kite flyers putting on kite shows. The Pattaya Kite on the Beach 2021 festival started on Friday (April 9) and will go on until April 19 held in conjunction with the Songkran celebration which marks the Thai New Year. - Bernama

Thai authorities have detected a highly infectious variant of the virus originally found in Britain.

Festivities for the rowdy Songkran holiday marking the Thai New Year, known for its public water fights, have been curtailed, with officials cancelling Bangkok street celebrations to discourage crowds.

Thousands of Thais traditionally return to their home provinces during the Songkran holiday period, which officially starts Tuesday.

"Please don't hold activities which will draw many people together including water fights or foam parties," he said in a podcast on Saturday.

The national government has not brought in a travel ban but, as of noon Sunday, 38 out of 77 provinces had announced their own entry restrictions.

They are asking people from Bangkok, Nakhon Pathom, Pathum Thani, Nonthaburi and Samut Prakan to self-isolate for 10 to 14 days.

On Friday authorities ordered the closure of all entertainment venues in 41 provinces for two weeks.

Thai police announced Sunday they were taking legal action against two Bangkok night spots in Thonglor for breaching pandemic restrictions and contributing to the outbreak.

"We charged managers of both clubs and a court ruled two months jail for both," police major general Sophon Sarabhat told reporters. 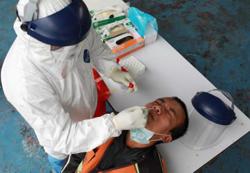