PHNOM PENH (Xinhua): Cambodia has recorded 576 new local cases of Covid-19 in the last 24 hours, the highest-ever since the virus hit the kingdom in January last year, a Ministry of Health (MoH) statement said on Friday (April 9).

The figure surpassed the previous highest daily record of 179 cases on March 26.

Of the new cases, 544 were found in the capital Phnom Penh, 16 in Svay Rieng province, 12 in Preah Sihanouk province, two in Siem Reap province and one each in Kandal and Kampong Cham provinces, the statement said.

The MoH's secretary of state and spokeswoman Or Vandine on Friday called on the people to stay at home during the upcoming Khmer New Year holiday from April 14-16 in order to help curb the virus spread.

"We are facing 'very high' risk of a large-scale community transmission that can disrupt socio-economic development and affect public health for a long term," she said in a message to the media.

Cambodia has been enduring the third wave of community outbreak of Covid-19 since Feb. 20. In a bid to stem the virus, the kingdom has closed down all schools, sports facilities, museums, cinemas and entertainment venues across the country.

Also, the kingdom has imposed a night curfew in capital Phnom Penh for two weeks from April 1 to 14 and banned inter-provincial travel for 14 days from April 7 to 20.

Cambodia has registered a total of 3,604 confirmed Covid-19 cases since the start of the pandemic, with 24 deaths and 1,984 recoveries, the MoH said.

As of Thursday, some 816,000 people in the priority groups have been vaccinated against the virus, showed a government report. 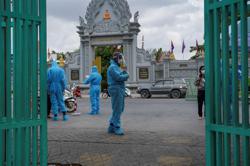