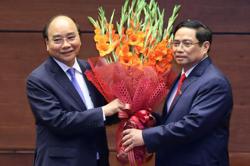 During the session that began on March 24, former Vietnamese Prime Minister Nguyen Xuan Phuc was elected as the new Vietnamese president, former head of the Organization Commission of the Communist Party of Vietnam Central Committee Pham Minh Chinh was elected as the Vietnamese prime minister, and former Secretary of the Municipal Party Committee of Hanoi Vuong Dinh Hue the new chairman of the National Assembly, completing the picture of the country's new powerful quartet alongside the Party chief Nguyen Phu Trong.

During the session, the lawmakers also voted on other key personnel changes among cabinet members and senior legislators.

With the pressure of achieving the target of 6.5% of GDP growth in Vietnam in 2021 despite the lasting impacts of Covid-19, as well as the more and more complicated international situation, the new leadership of Vietnam already has their work cut out for them.