MANILA, April 6 (Reuters): Asia's emerging currencies found some respite on Tuesday as the dollar fell to near two-week low and US bond yields retreated, with South Korea's won and Malaysia's ringgit leading gains in the region.

Stock markets were more mixed, with shares in Taiwan ending 1% higher following a market holiday on Monday, while Malaysia and Singapore shares were down less than half a percent.

The dollar's losses come even as data showed a gauge of US services activity hit a record high in March and bumper non-farm payrolls on Friday, raising questions as to how much further the greenback and US yields can go.

"While the market was caught wrong-footed at the start of the year, it is not as convincing to argue that dollar rates are now overly low," Eugene Leow, a DBS rates strategist said in a note.

"We are wary of frontloading Fed hikes; the Fed is unlikely to hike before 2023, in our view."

The dollar has risen sharply this year, enjoying its best quarter in nearly three years, as the US economy outperforms the world thanks to a loose monetary policy, large fiscal packages and an aggressive vaccination campaign.

All that has also helped raise the yield on 10-year Treasuries to pre-pandemic levels, sapping appetite for Asia's risk-sensitive assets. The won strengthened 0.7%, and the ringgit gained 0.3%.

On Wednesday, the Fed will release the minutes of its March meeting, though it will not include the recent strong data points.

By midday, Indian shares climbed 0.6% following sharp declines in the previous session, as the number of new cases in the country dipped on Tuesday to nearly 97,000 compared with more than 100,000 on Monday.

Investors are awaiting the Reserve Bank of India's policy meeting on Wednesday, where the focus will be on commentary as rates are expected to remain unchanged.

"We think the RBI will be open-ended on its accommodative stance, with comments highlighting that it will be maintained until recovery can be self-sustaining," TD Securities said in a client note.

"Anything more hawkish could hurt the bond market at a fragile time."

In the Philippines, shares climbed 1.5% and the peso edged higher.

Inflation eased for the first time in six months in March, though it remained above the central bank's target range for the year and Bangko Sentral ng Pilipinas' Governor said current monetary policy settings remained appropriate. 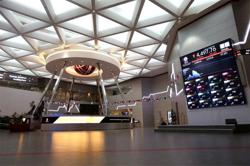