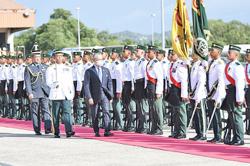 The cooperation would centre on three matters which include a reciprocal vaccination arrangement for both nationals covering diplomats, students and expatriates; ensuring access to vaccine supplies for both Brunei and Malaysia; and a reciprocal mutual recognition of vaccination certificates between both nations as this step would facilitate cross-border movement of the people between both countries, the joint statement on the 23rd Annual Leaders’ Consultation between His Majesty and Malaysian Prime Minister stated.

“His Majesty and the Prime Minister also held the 23rd Annual Leaders’ Consultation, which was conducted in a cordial and productive atmosphere, demonstrating the long-standing relations between the two countries and peoples.

Reflecting on the important ties, both leaders reaffirmed their commitment to further nurture the special relationship by broadening and strengthening collaboration in an array of mutually beneficial areas.

They also expressed appreciation on the continuous efforts to deepen exchanges and promote strategic cooperation in various fields under the respective bilateral mechanisms.

Both leaders also welcomed the recent discussions between the foreign ministers during the official visit of Malaysia’s Minister of Foreign Affairs Dato’ Seri Hishammuddin Tun Hussein to the Sultanate from February 28 to March 1.

The leaders recognised the profound impact of the Covid-19 pandemic upon the economy and social fabric of each other’s countries.

In this regard, they reiterated their commitment to working closely together in addressing the common challenges, and underscored the importance of revitalising and protecting the socio-economic stability of both countries and peoples.

Meanwhile, it was announced, The Association of South-East Asian Nations (Asean) will hold a summit meeting on the ongoing developments in Myanmar, Bruneian and Malaysian leaders said here on Monday.

As the current chair country of Asean, Brunei's Sultan Hassanal Bolkiah held bilateral talks with Muhyiddin Yassin, the Prime Minister of Malaysia, who is paying his first official visit to Brunei on April 4-5.

According to a joint statement on the 23rd Annual Leaders' Consultation, Haji Hassanal Bolkiah and Muhyiddin Yassin exchanged views on a number of regional and international issues of mutual interest during the bilateral meeting and expressed serious concern on the ongoing crisis in Myanmar and the rising number of fatalities.

They urged all parties to refrain from instigating further violence, and for all sides to immediately exercise utmost restraint and flexibility. The leaders called on all parties concerned to seek a peaceful solution and pursue constructive dialogue, reconciliation and quickly return to normalcy in accordance with the will and interests of the people of Myanmar and for the greater peace, security and stability of the region.

The leaders also recalled the purposes and principles enshrined in the Asean Charter, and emphasized that it remains in Asean's greater interest to see Myanmar resolve the crisis and regain stability. - Borneo Bulletin/ANN