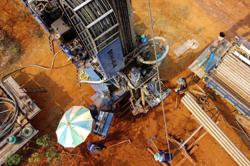 Beating the heat: A tiger playing in water to cool off amid the hot weather at a zoo in Chiang Mai. — Reuters

FACING severe drought as it enters its hottest season, the country has launched groundwater extraction operations in its most arid regions to tap sources deep beneath the soil, as it looks at ways to harness future supplies.

The groundwater department has sent geologists and more than 80 teams to areas not served by irrigation networks and regions typically hit by shortages as dam water levels are depleted.

In northeast Yasothon province, solar-powered water pumps and tanks have been deployed in one of 25 groundwater stations, among some 937 underground wells in the region.

“The water source on the surface, when it dries up, the only source left is what is underneath us, ” Natural Resources and Environment Minister Varawut Silpa-Archa said during a visit.

“The amount of groundwater underneath Thailand has been tremendous, ” he said, estimating that 10% to 15% of Thailand’s more than 700 million litres of rainwater was beneath the ground.

Groundwater abstraction has been controversial in some countries, with concern about over-

reliance on underground sources instead of protecting and better managing water resources on the surface.Some conservation groups say wildlife and flora are impacted by groundwater abstraction drying out lakes and wetlands while agriculture is consuming unsustainable amounts of water.

It can also cause aquifers to deplete and water tables to fall, while abstraction can cause land to sink, as has happened in and around the capital Bangkok.

Varawut said “every precaution” was being taken to prevent damage and sinkholes.

Despite efforts to convince farmers to cultivate less water-intensive crops, water demand for agriculture keeps growing. In a bid to harness future supplies, authorities are studying whether to develop hundreds more groundwater resources.Organic fruit farmer La Somabutr said there were few trees left to hold water and wells dried up in March and April, so the groundwater drilling had been a game-changer.

“It’s badly dry here, ” he said. “Now we have this groundwater. I feel like I’m reborn.” — Reuters 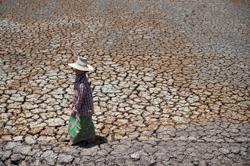