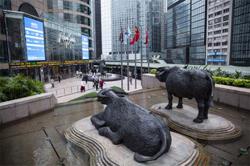 HONG KONG, March 20 (Bloomberg): The days of the massive first-day pop in Hong Kong’s initial public offering frenzy may be nearing an end.

Even as the pandemic spread for most of 2020, the offshore Chinese city’s IPOs and new listings were in hot demand from both institutional and mom-and-pop investors. With the bulk of new share sales posting large gains on their first-day of trading, investor euphoria was justified.

That was then. Last year’s largely winning investor play of piling into IPOs and exiting after they debuted is no longer a slam dunk: 31% of thirteen IPOs raising more than $100 million posted losses on day one this year, almost double the 17% in 2020. A median first-day move showed gains of 2.1% in 2021 from 5.7% last year, according to data compiled by Bloomberg.

Volatility sparked by the great rotation into previously unloved stocks sensitive to economic fluctuations from loftily valued tech and health-care plays is to blame, according to investors. Others also pointed to worries about policy being tightened in China as weighing on investors’ risk appetite for new stock.

"Most IPOs performed really, really strongly last year, but I’m not expecting that kind of movement this year,” said Joohee An, a fund manager at Mirae Asset Global Invest (HK) Ltd. Investors will be "more prudent” as market liquidity "won’t be as abundant as it used to be”, she added.

To be clear, listings by Kuaishou Technology and New Horizon Health Ltd. still did unusually well in February, with shares more than doubling on the first day.

Not everyone is concerned, given rising concerns voiced by some that global markets were in bubble territory.

"When you have these deals that don’t do well, it actually tells you that people are still being cautious about what they’re investing in and what they’re not, which is a good sign,” said Sumeet Singh, head of research at Aequitas Research in Singapore, who publishes on Smartkarma. "It means the market is doing OK.”

The upcoming multi-billion dollar listings of Baidu Inc. and Bilibili Inc. will be closely watched to see if Hong Kong’s IPO market still has steam, given their size and high profile as tech companies.

Baidu, which priced at an almost 3% discount to its U.S.-traded shares, will start trading March 23. Investor demand for its offering was strong, with retail investors putting in orders for almost 100 times the stock made available to them, according to a person familiar with the matter. Bilibili, the video streaming platform that is looking to raise as much as $3.2 billion in a second listing, plans to debut on March 29.