BANGKOK, March 7 (Bloomberg): Thailand plans to relax quarantine rules for foreign visitors from next month as part of a series of steps being considered to revive the nation’s tourism sector, the Bangkok Post reported.

The Centre for Covid-19 Situation Administration is set to consider on Monday (March 8), a proposal that will allow foreign visitors to leave their hotel rooms after three days of a mandatory two-week quarantine, the newspaper reported. The so-called area hotel quarantine will still require tourists to confine themselves to the properties, it said.

The quarantine relaxation, discussed at a meeting chaired by Tourism and Sports Minister Phiphat Ratchakitprakarn on Saturday, will initially be considered for top five tourist destinations such as Phuket and Krabi, the Post reported.

The Covid panel will also discuss a proposal to waive the quarantine requirement for vaccinated visitors, it said.

Thailand is betting on a revival in tourism, which accounted for about a fifth of the country’s gross domestic product pre-pandemic, to return South-East Asia’s second-largest economy to growth. 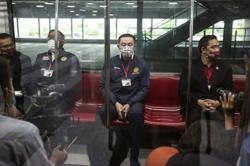