People hold up the three finger salute as they attend a funeral for National League for Democracy (NLD) party member Khin Maung Latt during his funeral in Muslim tradition held by his family and NLD members in Yangon on March 7, 2021. Latt was arrested by Myanmar police on March 6 and was declared dead a day later, amid ongoing demonstrations against the military coup. - AFP

BEIJING, March 7 (Reuters): China is willing to engage with "all parties" to ease the crisis in neighbouring Myanmar and is not taking sides, the Chinese government's top diplomat, State Councillor Wang Yi, said on Sunday.

Beijing has said the situation in Myanmar, where the military seized power last month, was "absolutely not what China wants to see" and has dismissed social media rumours of Chinese involvement in the coup as nonsense.

"China is ... willing to contact and communicate with all parties on the basis of respecting Myanmar's sovereignty and the will of the people, so as to play a constructive role in easing tensions," Wang told a news conference on the sidelines of China's annual gathering of parliament.

While Western countries have strongly condemned the Feb. 1 coup, China has been more cautious, emphasising the importance of stability.

China nonetheless agreed to a United Nations Security Council statement that called for the release of elected leader Aung San Suu Kyi and other detainees and voiced concern over the state of emergency.

"China has long-term friendly exchanges with all parties and factions in Myanmar, including the National League for Democracy (NLD), and friendship with China has always been the consensus of all sectors in Myanmar," Wang said.

The NLD is Suu Kyi's party. Its landslide November victory in national elections has been ignored by the junta.

"No matter how the situation in Myanmar changes, China's determination to promote China-Myanmar relations will not waver, and China's direction of promoting China-Myanmar friendly cooperation will not change," Wang said.

On Saturday, an Israeli-Canadian lobbyist hired by Myanmar's junta told Reuters that the generals are keen to leave politics after their coup and seek to improve relations with the United States and distance themselves from China.

Some of the protests against the coup, which have drawn hundreds of thousands of people onto the streets, have taken place outside the Chinese embassy in Yangon, with protesters accusing Beijing of supporting the junta.

Beijing has said it was not informed in advance of the coup. 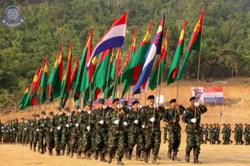