Prisoners put to work in factories desperate for labour

Facing an acute labour shortage after the pandemic-induced lockdown sparked an exodus of migrant workers, Thailand has a solution: Get prisoners to work in factories.

The initiative, put forward by Justice Minister Somsak Thepsuthin, would involve building industrial estates where companies can run their production facilities staffed by inmates nearing the end of their jail sentences.

been in prison, with possibly ready employment upon their release.

“This is an important project that needs to happen, ” Somsak, who has been justice minister since July 2019, said in an interview on Wednesday in Bangkok.

“It helps companies and inmates, and it saves taxpayers’ money.”

One is Thailand’s over-reliance on transient workers from neighbouring countries who make goods for exports – the economy’s biggest growth engine.

Secondly, Thai prisons are bursting at the seams with more than 300,000 inmates, which is 5% above capacity.

While manufacturers get tax benefits, prisoners employed by them could even get a permanent job at the end of their term.

Inmates serving term for non-violent crimes, like drug use, will be eligible as long as they are willing to work. — Bloomberg 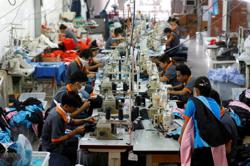