'How much more can we allow the Myanmar military to get away with?' asks UN envoy 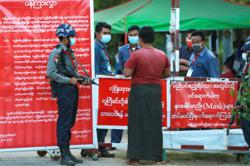 Protesters wear protective equipment as they prepare to face off against security forces in Yangon on March 5, 2021.- AFP

"It is critical that this council is resolute and coherent in putting the security forces on notice and standing with the people of Myanmar firmly, in support of the clear November election results," Christine Schraner Burgener told the 15-member council in a closed meeting, according to a copy of her remarks seen by Reuters.

"There is an urgency for collective action. How much more can we allow the Myanmar military to get away with?" she asked, adding that hope invested in the United Nations by people in the southeast Asian nation was "waning."

Myanmar has been in turmoil since the army seized power and detained civilian government leader Aung San Suu Kyi and much of her National League for Democracy (NLD) party after the military complained of fraud in a November election. The election commission said the vote was fair.

Police in Myanmar on Friday opened fire on protesters against the coup, killing one man.

"All parties should exercise utmost calm and restraint, refrain from intensifying tensions or using violence, and prevent any incident of bloodshed," said China's UN Ambassador Zhang Jun, according to remarks released after the UN. meeting. "We don't want to see instability, even chaos in Myanmar."

The UN Security Council issued a statement last month voicing concern over the state of emergency imposed by the Myanmar military, but stopped short of condemning the coup due to opposition from Russia and China.

"We'll continue to monitor the situation and take actions that the council can reach agreement on," Britain's U.N. Ambassador Barbara Woodward told reporters after Friday's meeting. Diplomats said the council is considering another statement on Myanmar, which has to be agreed by consensus.

But in an effort to preserve council unity on Myanmar, diplomats said sanctions were unlikely to be considered anytime soon as such measures would probably be opposed by China and Russia, who - along with the United States, France and Britain - are council veto powers.

"The messages and measures of the international community should be conducive for the parties in Myanmar to bridge differences and resolve problems, and avoid escalating tensions or further complicating the situation," Zhang said.

Schraner Burgener again warned that no country should recognize or legitimize the Myanmar junta. She urged the Security Council to give its full support to Myanmar's U.N. ambassador Kyaw Moe Tun.

Kyaw Moe Tun was fired by the junta on Saturday, a day after he urged countries at the 193-member U.N. General Assembly to use "any means necessary" to reverse the coup.

The junta appointed deputy U.N. Ambassador Tin Maung Naing to replace him, but he has since resigned and Myanmar's U.N. mission told the United Nations, in a note seen by Reuters on Thursday, that Kyaw Moe Tun remained the country's envoy.

Schraner Burgener also told the council that the situation in Myanmar was moving toward "an acute humanitarian crisis."