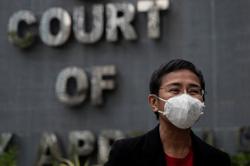 JOURNALIST Maria Ressa, who runs a website known for its tough scrutiny of President Rodrigo Duterte, took the witness stand for the first time to counter tax evasion charges that she maintains were politically motivated.

Ressa, a Time Magazine Person of the Year in 2018 for fighting media intimidation, is facing several government lawsuits that have stoked international concern about harassment of journalists in a country once seen as a standard bearer for press freedom in Asia.

Speaking to reporters after testifying for two and a half hours in Manila yesterday, she asked the government to allow journalists to work freely and independently.

“We’re here to work with you, and you will want us to do that, ” she said.

Ressa, 57, chief executive of the news site Rappler, was convicted of libel in June 2020 and sentenced up to six years in prison, a ruling seen as a blow to democratic freedoms under Duterte’s increasingly popular authoritarianism.

She was freed on bail.

Her court appearance yesterday is over accusations that Rappler falsified tax returns by omitting the proceeds of a sale of depositary receipts to foreign investors, which later became the securities regulator’s basis to revoke its licence to operate.

The securities regulator alleges that Rappler allowed foreigners to illegally own shares in a domestic media firm, a charge it denies.

Rappler is still operating pending its appeal against its licence being revoked.

Ressa, the last witness to be presented by the defence in the tax evasion lawsuits, said she decided to take the stand because “no one knows (the company) better”.

“I felt good afterwards. I was happy to respond to the charges. If the government believes that they can intimidate me, no, I won’t allow it, ” she said. — Reuters