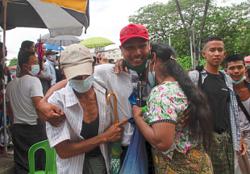 YANGON, March 5 (Eleven Media Group/ANN): Three journalists from Myanmar’s Eleven Media Group have refused to apologise to the Yangon regional government for a report criticising its business dealings and budget.

And they stand behind the reporting that prompted criminal charges of incitement against them, RFA reported quoting the news outlet’s editor-in-chief on Tuesday.

Chief reporter Phyo Wai Win and managing editors Kyaw Zaw Lin and Nari Min were arrested and detained in October on charges of committing offenses against the state for publishing an article with a critical focus on Yangon government spending.

Though the journalists welcomed a move by Yangon officials to drop the case in November, the journalists maintain that the report is factually correct and that they have no reason to apologize as the chief minister has requested, chief editor Kyaw Zaw Lin told RFA’s Myanmar Service.
Article type: metered
User Type: anonymous web
User Status:
Campaign ID: 46
Cxense type: free
User access status: 3