"They were in our country's (Indonesia) waters."

Among the 10 vessels, eight were Vietnamese-flagged boats and two were Malaysian-flagged vessels.

According to Batam Prosecutor Office's head Polin Octavianus Sitanggang, the sinking was carried out in two phases, namely four ships on Wednesday and six others on Thursday.

"In the process, we made holes on the hulls of the boats and filled them with waters and ballasts to make it easy to sink the boats...," said Sitanggang. - Xinhua
Article type: metered
User Type: anonymous web
User Status:
Campaign ID: 46
Cxense type: free
User access status: 3 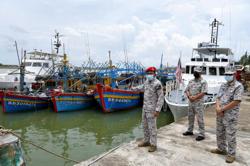