THE rate of deforestation in the world’s third biggest rainforest reduced by 75% last year by controlling forest fires more effectively and limiting clearing of woodland, the Environment Ministry said.

However, global environmental group Greenpeace was sceptical, saying the deforestation rate most likely dropped in 2020 due to a slowdown in economic activity during the coronavirus pandemic as well as unusually wet weather.

Deforestation in 2020 was estimated at around 115,500ha, down from around 462,500ha in 2019, Environment and Forestry Ministry senior official Ruandha Agung Sugardiman said on Wednesday.

“Efforts undertaken by the Environment and Forestry Ministry have brought significant result, ” he said, citing policies such as a moratorium on primary forest clearing and improved forest fire management, including cloud seeding.

Indonesia is prone to annual forest fires which the government says are often started intentionally by farmers as a cheap land-clearance method even though flames can spread uncontrollably, particularly during the dry season.

Greenpeace challenged the ministry’s view of the factors that had eased deforestation.

“To claim that forest fire control, agrarian reform and law enforcement in the forestry sector were the main contributors, I think is a bit premature, ” Greenpeace Indonesia country director Leonardo Simanjuntak said.

Citing the ministry’s 2020 deforestation figure, Greenpeace campaigner Kiki Taufik said: “I think 115,500ha, twice the size of Jakarta, is still quite large considering it was during the pandemic when the government told people to stay home.” 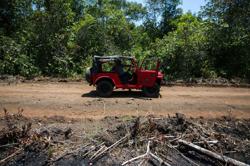