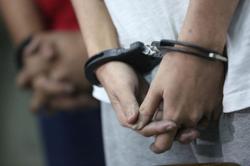 Stark reminder: A file photo of a woman holding her partner and alleged drug pusher who was shot dead during the ‘tokhang’ operation by unidentified men in Manila. — Philippine Daily Inquirer/ANN

THE Makabayan bloc expressed its “resounding objection to proposed amendments to the Comprehensive Dangerous Drugs Act, which it said “whittles down” the constitutional presumption of innocence to a “mere sliver”.

The measure has been criticised over the measure for providing legal presumptions on who is considered a drug importer, financier, or coddler.

“With at least 30 presumptions against mere suspects and favouring PNP (Philippine National Police), PDEA (Philippine Drug Enforcement Agency), and other law enforcement agents, House Bill 7814 whittles down the constitutional presumption of innocence to a mere sliver, ” the lawmakers said.

“One’s mere presence in the place of a drug operation makes him or her presumptively involved in the sale or dispensation of illegal drugs.

“The mere judgment of agents or their assets – despite their lack of medical knowledge or training –that one has some physical manifestation of being a drug user is enough for the latter’s arrest for being a drug user, ” the lawmakers added in a joint statement.

Further, the bloc criticised the measure, saying many of the presumptions found in the Bill “are even irrational or have no medical basis.”

“Numerous presumptions favouring government agents give these agents too much leeway to arrest, detain, and charge too many persons, regardless of their actual participation in alleged drug transactions and the nature of their participation, ” the House bloc said.

“At the root of these presumptions is the oft-flaunted ‘presumption of regularity in the performance by the police and drug agents of their functions or the presumption that they will never resort to shortcuts and violations and irregularities in procedure, ” lawmakers further said.

The lawmakers maintained that the drug problem in the country can only be eradicated “through effective law enforcement, policies reflecting public accountability and good governance, and competent officials both at the helm of agencies and on the field.”

“Shock-and-awe strategies such as tokhang which target users, small fry, and the poor while exempting big-time and high-profile traders, smugglers, and importers among the rich and powerful will not protect Filipinos from dangerous drugs, ” the lawmakers said. — Philippine Daily Inquirer/ANN