Kim Jong-un said the city and county chief secretaries had responsibility for taking care of their residents.- Reuters

SEOUL (Reuters): North Korean leader Kim Jong-un stressed the significance of the role that city and county chief secretaries have in improving the lives of the people and carrying out his five-year economic policies, state news media KCNA said on Thursday (March 4).

Kim said the city and county chief secretaries had responsibility for taking care of their residents and urged them to embark on a fresh "turning point" to help develop their areas in line with his new five-year strategy unveiled at the January party congress.

"Now everything depends on the strenuous efforts and role of the chief secretaries," Kim said in a statement carried by KCNA.

North Korea has not reported any confirmed coronavirus cases, but has imposed crippling border closings, banned most international travel and severely restricted movement inside the country. 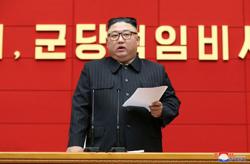