Guo Weimin, spokesman for the fourth session of the 13th National Committee of the CPPCC, briefs the media via video link about the session at a news conference in Beijing on March 3. - China Daily

BEIJING (China Daily/ANN): False accusations and lies concocted by some anti-China politicians have misguided public opinion about China in some Western countries and negatively affected the country's international image, a senior official said on Wednesday (March 3).

Guo Weimin, spokesman for the fourth session of the 13th National Committee of the Chinese People's Political Consultative Conference, made the remark at a news conference in Beijing ahead of the top political advisory body's annual session.

The CPPCC session opens on Thursday.

Guo said that in recent years, some Western politicians have tried to discredit and viciously attacked China on some issues, such as tracing the source of the Covid-19 pandemic as well as issues related to Xinjiang and Hong Kong.

What they did has negatively affected views of China among the public in the West, he added.

The CPPCC National Committee and many CPPCC members have been active in explaining China's positions and hitting back at false accusations to safeguard the nation's sovereignty, security and development interests, the spokesman said.

Guo cited opinion polls by some independent international agencies, saying they have shown that people from a great many countries and regions favour China.

"With an increasing number of foreigners visiting China and our intensified international exchanges and cooperation, I believe more and more people will like China better, and favorable views by the international community toward China will keep rising," he said.

Guo said China is a peace-loving country and has been working to make friends and build good relationships with other countries.

In responding to a question about some foreign politicians' attempts to promote a boycott of the Beijing 2022 Winter Olympics and Paralympics, Guo said such moves are futile and doomed to fail.

He said that actions by certain foreign politicians to politicise sports and disrupt the Games are against the spirit of the Olympic Charter.

"We believe such actions will not win the support of the international community," he said, adding that some foreign leaders, including officials from the International Olympic Committee, have voiced their opposition to such actions, and preparations for the Games are going smoothly in spite of the pandemic.

The CPPCC session and the fourth session of the 13th National People's Congress － the country's top legislature － which is to open on Friday, are known collectively as the two sessions, the biggest political event in China.

Some 3,000 lawmakers will discuss major laws and regulations. They will also discuss and approve several key documents, including the Government Work Report. More than 2,000 political advisers will also participate in discussions on documents and put forward opinions and suggestions. - China Daily/Asia News Network 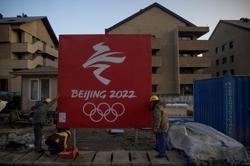