Mourners make the three-finger salute as they attend the funeral service for Nyi Nyi Aung Htet Naing, who died from a gunshot wound while attending a protest against the military coup, in Yangon on Monday (March 2, 2021). - AFP

Foreign ministers from the Association of South-East Asian Nations (Asean) regional bloc will hold talks with a junta representative to discuss the crisis that began when the military detained civilian leader Aung San Suu Kyi.

Violence on Sunday was the worst seen so far, with the United Nations saying at least 18 people were killed when troops and police fired on demonstrators in cities across Myanmar.

Asean, which brings together 10 countries including Myanmar, has long been criticised for inaction in the face of crises, with members typically sticking to the bloc's policy of non-interference in each others affairs.

But some of the bloc's most influential members have issued withering criticism of the military in recent days. 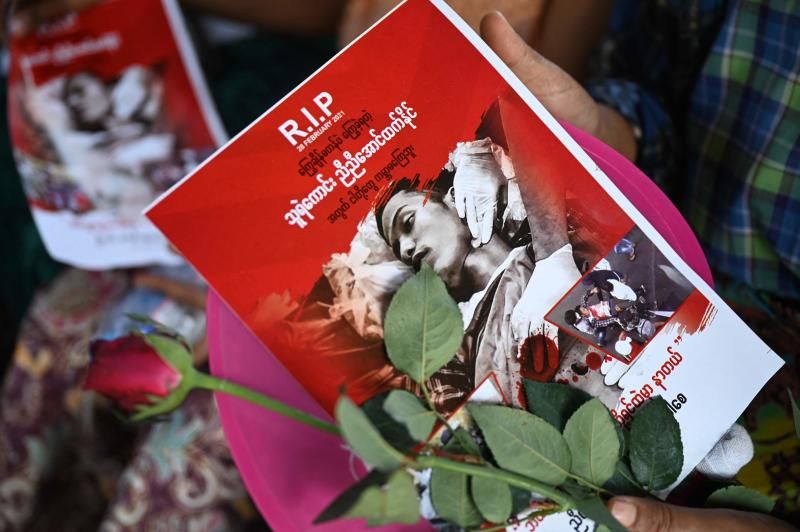 "We are appalled by the use of lethal force against civilians," Singapore's Foreign Minister Vivian Balakrishnan told the city-state's parliament Monday.

"We call on the Myanmar military authorities to exercise utmost restraint," he added, while urging a "return to the path of democratic transition".

As Myanmar's biggest foreign investor, the prosperous city-state is seen has having some leverage over the generals.

The online talks are due to start at 4pm (0800 GMT), with one diplomat telling AFP the ministers will likely "ask the Myanmar military to stop the violence and attacks against the people".

"Asean will also ask the military to have a dialogue with all parties including with (Suu Kyi's National League for Democracy," said the diplomat, speaking on condition of anonymity.

But observers are sceptical about what difference the bloc can make -- pointing to its policies of non-interference and making decisions based on consensus.

Singapore has already said it does not see the need for broad sanctions on Myanmar for fear of hurting ordinary people.

Several Asean members, such as Thailand and Cambodia, have their own authoritarian governments and are likely to block any real action.

Oh Ei Sun, an analyst from the Singapore Institute of International Affairs, told AFP that nothing more than "strong language" could be expected from Asean.

Countries such as Thailand, Cambodia and Laos "have their own regime survival to worry about so I don't think they are too keen to advocate for intervention. And they wouldn't want similar intervention to fall upon them", he said. - AFP
Article type: free
User access status: