A health worker shows a vial of Sinovac Biotech’s Coronavac during the vaccination of Philippine military at the national headquarters of the Philippine Army in Fort Bonifacio, Taguig City, Metro Manila, Philippines, on Tuesday (March 2, 2021). - Reuters

The death toll climbed to 12,369 after 47 more patients died from the viral disease, the DOH said.

It added 144 more patients recovered, raising the total number of recoveries to 534,463.

The Philippines began its vaccination drive against COVID-19 on Monday, less than a day after the arrival of a batch of China's coronavirus vaccines. "Everyone celebrated. Others even shed tears of joy at the PGH (the Philippine General Hospital), especially when they saw Doctor Legaspi getting the jabs," he told a televised press conference.

"Our medical frontliners are happy because they now have peace of mind that they have protection despite their exposure to the coronavirus," Roque added.

Health Secretary Francisco Duque said that Monday's rollout of the Sinovac vaccine CoronaVac that China donated to the Philippines was "heartwarming" and "quite satisfactory."

"There was much pride and joy in seeing that the health care workers have started to receive the vaccination, protection against COVID-19. It was heartwarming to witness the historic event," Duque said on TV Tuesday. 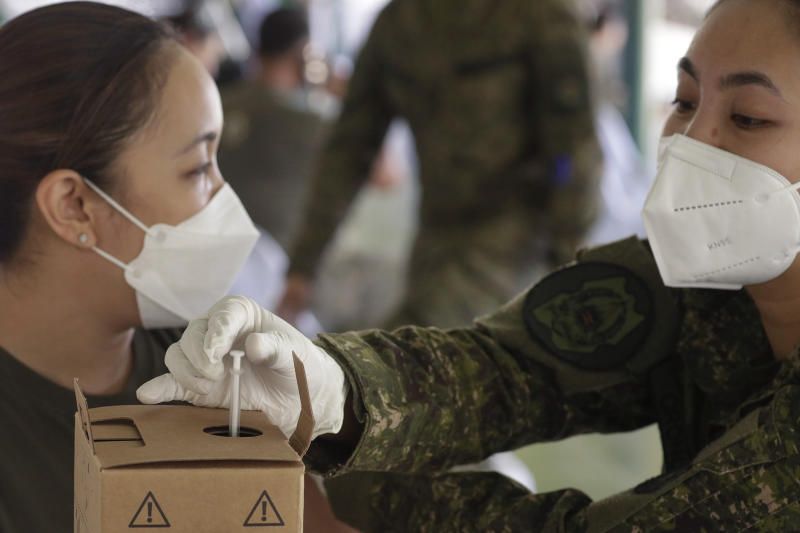 PGH Director Gerardo Legaspi, the first Filipino to receive the Chinese-made CoronaVac vaccine, said he felt "excited" to see a long line of health workers queueing to get the vaccine on the second day of the vaccination drive.

"I feel excited again because I saw the long line of (health workers) outside waiting for their turn today," Legaspi said.

Legaspi said the PGH administered the vaccine to 128 people on day one. "We planned to vaccinate 50, but surprisingly 128 came on Monday," he said, adding that the PGH will administer jabs to around 200 on Tuesday.

The government aims to inoculate up to 70 million Filipinos this year to achieve herd immunity, starting with health care workers, the elderly, and the poor communities.

The Philippines is negotiating to buy over 160 million vaccine doses from different pharmaceutical firms this year, including Sinovac.