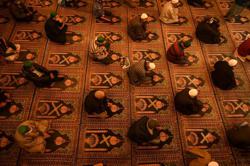 Safety drive: A healthcare worker administering a dose of the Sinovac vaccine at the Nusa Dua Convention Centre in Bali. — Bloomberg

South-east Asia’s ride-hailing giant Grab Holdings Inc is setting up drive-through vaccination services across Indonesia in collaboration with the government to help the nation inoculate more than 180 million people against Covid-19.

The programme, which started yesterday on the resort island of Bali, is the first to be done in South-East Asia, Grab Indonesia president Ridzki Kramadibrata said in a virtual news briefing.

Indonesia has made it mandatory for eligible citizens to take a shot.

The nation is aggressively rolling out a mass-inoculation drive as it struggles to contain the largest coronavirus outbreak in South-East Asia. It plans to vaccinate 70 million people by August, roughly a third of the total target of 181.5 million for the public campaign.

“We need to collaborate with the private sector to speed up the vaccine campaign, ” Health Minister Budi Gunadi Sadikin said.

The Grab vaccine centre in Bali is prepared to dispense 840 shots a day, for a total of 5,000 vaccinations in a week, the company said.

The first centre plans to vaccinate 2,500 drivers in the transportation sector, including Grab drivers and delivery-partners and 2,500 public sector workers in tourism in Bali.

More drive-through centres will be set up other cities, Ridzki said.

As of Saturday, 1.47 million people in Indonesia have received their first dose of the Sinovac Biotech Ltd vaccine, while over 980,000 have taken their second.

Around 1.3 million people in the country have been infected and more than 35,000 died from the virus. — Bloomberg